COEUR d’ALENE — Citing both a failure and an inability to perform the duties of his office, county commissioners made the unprecedented decision Wednesday night to cut Kootenai County Assessor Béla Kovacs’ salary in half.

Commissioners voted unanimously to cut the assessor’s pay during a public hearing where they also voted to approve a $120 million budget for fiscal year 2023. The board is expected to formally adopt the budget today.

Kovacs was appointed to the office of Kootenai County assessor in May 2020, after the death of assessor Rich Houser. He won the Republican primary election for the office in May.

Bob Scott, Kovacs’ opponent in the primary and the residential lead appraiser for the assessor’s office, announced Wednesday that he’s filed to run in November as a write-in candidate.

Commissioner Chris Fillios said Wednesday that county employees and other elected officials have approached the board with “grave concerns” about Kovacs’ performance.

Before the primary election, 34 county employees signed a statement of no confidence in Kovacs’ ability to lead the assessor’s office.

In letters submitted to commissioners and The Press, employees cited Kovacs’ inexperience, disinterest in the daily workings of the office and alleged disrespect for staff as reasons for their lack of support.

Following the completion and mailing of the annual property value assessments in June, which initiated 700 requests for appeals from property owners, Kovacs’ office missed deadlines to provide the values to Kootenai County Clerk Jim Brannon.

Kovacs ultimately delivered the 2022 property values to Brannon’s office more than a month late, with a disclaimer that “there appears to be an imbalance on this roll.”

Brannon said the situation was unprecedented.

Fillios said commissioners have discussed with Kovacs his failure to perform statutory duties, but Kovacs has “refused” to take any responsibility for his performance.

“This is unprecedented and something we, frankly, don’t want to do,” she said. “I do this with a heavy heart. I don’t know what else to do.”

Fillios pointed to Idaho Code 31-802, which provides that county commissioners are “to supervise the official conduct of all county officers” and see that they “faithfully perform their duties.”

“I have never denied responsibility, not once,” Kovacs told commissioners.

Since his appointment, he said he’s worked to update antiquated systems and processes within his office.

“I’ve been asked to fix a system in two years that took many, many years to build,” he said.

It was an unusual move for Duncan, who voted against the previous three budgets, including one that had no property tax increase.

Commissioner Bill Brooks said he believes the increase is reasonable.

“Year after year after year over the last decade, we’ve been afraid to take 3%,” Brooks said. “When you do that, you start building up a deficit, and then, all of a sudden, people are shocked.”

Personnel costs make up the bulk of the budget — about $83 million of the $120 million total.

Those costs include an approximate 6% cost of living adjustment wage increase for all county employees. Wage study and cost of living increases total around $8.1 million.

Fillios said the pay increases are past due and necessary to retain and attract employees. The county has 127 open positions.

“We have a substantial number of employees who have been underpaid for years — in some cases, double-digit, grossly underpaid,” he said. 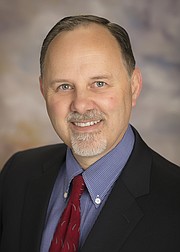