Courtesy photo Luke West of Coeur d'Alene shot a 6-under-par 65 to earn medalist honors at the Sandpoint Invitational on Monday at The Idaho Club.

SANDPOINT — Luke West shot a 6-under-par 65 on Monday to earn medalist honors and lead Coeur d’Alene to the team title at the Sandpoint Invitational at The Idaho Club.

“We are turning it on at the right time,” Coeur d’Alene coach Chase Bennett said. “Luke has really stepped up his game when it matters. The rest of the guys have figured out what it takes to conquer the course and win.”

In the girls tournament, Coeur d’Alene shot 377 and finished second, 27 strokes behind Sandpoint. Audrey Sheffler of Sandpoint was medalist with an 83.

POST FALLS — Coming off six matches in two days over the weekend, the Trojans began a stretch of four matches in three nights with a 20-25, 25-18, 25-18, 25-14 victory over the Tigers of the Greater Spokane League on senior night at The Arena.

“We got to celebrate our wonderful seniors — Kaelyn Nagel, Carleen Codd, Shauna Cozza and Piper Wasson — tonight, and to come away with a win made the night even more special,” Post Falls coach Willow Hanna said.

Timberlake returns to action Oct. 3 at home vs. Riverside.

ST. MARIES — Callie Smith had two digs, Kaylee Lupo one kill, Keira Bohannon one assist, Tuesday Glessner one ace for the visiting Warriors in the 25-9, 25-14, 25-17 loss to the Lumberjacks junior varsity.

“I am very proud of the girls, they came together and were working as a team tonight,” Kootenai coach Lacey Bohannon said. “It was nice to see them find their reason for playing volleyball again. You could see that what we have been working on in practice is clicking. There were some great saves by multiple players. As a team their passing consistency has gotten so much better.”

MERIDIAN — Lake City finished tied for third with Timberline in the Gold Bracket, after losing to Highland in the semifinals.

“Overall, it was an awesome weekend,” Lake City coach Michelle Kleinberg said. “We played tough against some very strong competition.”

COEUR d’ALENE — Sophomore Jacob Molina scored twice and assisted on the other two goals as the host Timberwolves blanked the Hawks in Inland Empire League play.

“We started off well but we weren’t very efficient in the final third,” Lake City coach Kevin Jump said. “Lakeland made it difficult for us today. They gave us their best effort for the entire match. We played well; but, we were just missing something today on our final touch. We’re grateful for coming out with a victory.”

RATHDRUM — The visiting Timberwolves scored eight times in the first 32 minutes on the Inland Empire League game at Sunrise Rotary Field to improve to 11-0-0, 8-0-0 IEL.

“That’s a huge feat. Sandpoint didn’t score on them,” Lakeland coach Kevin Rogge said. “I was happy; we played on their half more than expected; and we did have chances. They (the T-Wolves) are quick, fast and they can pass the ball. We’re still building our program.”

POST FALLS — Maddie Daigle and Rebekah Hines each had hat tricks as the Panthers beat the Badgers in Intermountain League play at Post Falls High.

“Rebekah and Maddie are still finding some good connections with each other and doing a good job of hitting the back of the net,” Charter coach Stacy Smith said. “We were able to cycle in several players tonight and give some of our youth some on-field experience. It’s always a good day to be able to do that and give a rest to some of our more experienced players that we rely on.” 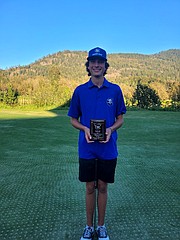 Courtesy photo Luke West of Coeur d'Alene shot a 6-under-par 65 to earn medalist honors at the Sandpoint Invitational on Monday at The Idaho Club.