A cross stands high above the entry to St. Luke's Episcopal Church in Coeur d'Alene.

Light shines in a stained-glass window at St. Luke's Episcopal Church on Friday.

The shadow of a cross falls on the roof at St. Luke's Episcopal Church in Coeur d'Alene on Friday.

So, she wasn't sure what kind of reception they would get.

Turns out, she didn't need to be worried.

The congregation was warm, kind and friendly.

"They just embraced us," Lane said. "It’s what kept us here."

And it has strengthened her faith.

"I can’t imagine life without faith behind us, and without a church that supplies that faith and that love," she said.

Likewise for Kristin Keyes, who began attending the church at Fifth and Wallace in 2015.

Keyes loves that St. Luke's, under the leadership of the Rev. David Gortner, invites people to explore their faith.

"There are no right answers. There’s not a prescribed way you have to be. We’re allowed to explore our faith in a way that we need to," she said.

Some days, Keyes said she has deep questions about what she believes and why. Others, she is "deeply imbued" with God and can feel his love.

It will be using a worship service from the 1892 Book of Common Prayer of the Episcopal Church, which was published the same year as the first public worship in St. Luke's building.

It is also celebrating the Feast of St. Luke, the biblical saint in whose honor the church was named.

Gortner said St. Luke's is rooted in the Christian faith, in scripture, in tradition, that goes back centuries.

It helps the homeless, feeds the hungry and strengthens the weak.

The cross and the flag are displayed in the sanctuary.

"You’ll feel that in how we carry on our worship, but also how we are thinking and how we pray and how we move forward," he said Friday.

The church he added, is committed to "sharing and celebrating the overwhelmingly generous and unconditional love of Jesus Christ."

St. Luke's is among the three oldest and longest-lasting churches in Coeur d'Alene, joined in history with First Presbyterian and St. Thomas' Roman Catholic Churches. A fellowship of Episcopalians began in the 1880s through the faithful fellowship and shared leadership of officers stationed at Fort Sherman, who gathered for prayer in their quarters and at the fort chapel — and the frontier bishop, Daniel Sylvester Tuttle, came through here more than once in his circuit-riding across Montana, Utah and Idaho.

In 1891, St. Luke's formed officially as a church, and in January 1892, the congregation had completed the exterior of the building (in a smaller form that was later expanded). In March 1892, the church opened its doors for its first worship service with its first priest, Herman Page.

"Over the decades, St. Luke's has been active in faithful weekly worship and Christian education," said a press release. "Its members have been significant contributors to civic life in the community."

Members, about 125, come from across North Idaho and extend into Washington.

St. Luke's has a heritage of concern for care and justice in the communities, the release said. For decades, the church has hosted addiction-recovery groups, and for over 10 years has housed the offices of Family Promise of North Idaho.

To cultivate life-giving relationships in Christ with all, through deliberate discipleship, courageous conversations, purposeful partnerships, and authentic action across North Idaho.

St. Luke's Gospel is where Jesus reaches wide across social divisions and shows deep care for those who are considered outsiders.

"We have made an impact of love across this community for over 130 years, and I want to carry that on," she said. "I want to carry on stewardship, respect for the past, and our mission in our community. I love that. This is my family. Yes, even the people who went before, and the ones I don’t even know yet, long after I’m dead. They are my family. I have this connection with the past and the future.”

Ian Hicks came to the church in February 2021, after moving to the Coeur d'Alene area.

"We walked in that door and we found that we were very, very welcome," he said.

Hicks has been involved in renovations and upgrades to the church.

"You support your church. That’s what we have. We have a solid team of people who just cooperate.

John Albee likes that it has women priests and deacons.

"The church gives you some guidelines, but it’s up to us how we want to interpret those and use it in our lives. That’s important to me," he said.

Phyllis loves the music, sings in the choir and is involved in the Women's Guild.

Services keep her rooted in her faith.

"It reminds me every Sunday that I don't always live up to it," she said.

Barbara Webb has called St. Luke's her church for 12 years.

She enjoys its open-minded ways.

"You can have a different interpretation of scriptures and that’s OK," she said.

St. Luke's is filled with people who want to give back to their community and help others, Webb said.

"This church kind of lives that," she said.

The Rev. David Gortner is entering his fifth year guiding St. Luke's, which he said is "a big tent for all sorts of people."

St. Luke's wants people to be involved in the church and connect with each other. They are challenged to step out in faith.

"Where is God calling us now and what are we going to do to follow that call?" he said.

Gortner said he is encouraged by the congregation's "continued eagerness to pour energy and life into this faith community, the eagerness to grow in faith and in Christ."

"We want to impact community in a positive way that’s life-giving, life-affirming and life-building," he said.

The shadow of a cross falls on the roof at St. Luke's Episcopal Church in Coeur d'Alene on Friday. 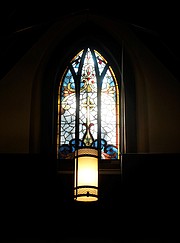 Light shines in a stained-glass window at St. Luke's Episcopal Church on Friday. 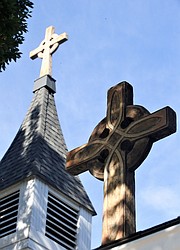 A cross stands high above the entry to St. Luke's Episcopal Church in Coeur d'Alene.