An annexation request has been submitted to the city of Coeur d’Alene, said Coeur Terre principal planner Connie Krueger. Coeur Terre is a residential community project by Kootenai County Land Company and its parent organization, Lakeside Companies. The massive development could eventually house about 4,500 families.

“There are currently 453 acres laid out,” Enderud said.

The remaining acreage sits to the west of Huetter Avenue, within Post Falls city limits and no movement is anticipated on that side until the completion of the alternative 95 corridor study, Enderud said. The Idaho Department of Transportation has undertaken a study to determine the best route to remedy major traffic issues, including looking at options other than the Huetter Bypass.

The process is expected to take some time.

“Ground can be broken typically two to three years after the annexation is approved,” Krueger told The Press Thursday. “If you’re approved to move forward, you then enter into the development process.”

The Post Falls portion of the project is on hold and developers have not yet done the level of detailed planning for that side, Krueger said.

The Coeur Terre design includes 10 acres set aside for an elementary school in the southern end of the property and 20 acres for a middle school in the northeast corner. Pedestrian and bicycle traffic will have a connected internal trail system to enjoy, and the trail system will connect to the Prairie Trail System, which connects to the Centennial Trail. Several parks are planned throughout and they may incorporate some water features, like ponds for example, Krueger said.

Density of the plan is about 5 homes per acre with “little pockets of higher density,” Krueger said. The concept allows for a “range of housing types and price-points,” according to documentation provided at https://www.kcolandcompany.com/portfolio/coeur-terre/. Plans on the Coeur d’Alene side include about 2,000 individual residential units. A mixed-use commercial area will provide an additional 330 second story units with commercial use on the ground level, Krueger said.

The preliminary concept for the mixed-use area allows for about 240,000 square feet of retail space in the southwest corner of the development, Krueger said.

Plans for the northeast segment of the project includes several “live/work units,” Krueger said. Developers say they have seen a change in how people are working, with working from home becoming more common. With this in mind they have planned some urban townhomes that provide office space downstairs with living quarters up above.

“If the trend continues, we may expand this section,” Krueger said.

Though the build on the Coeur d’Alene side of the property could take up to 20 or 30 years, and will be developed one neighborhood at a time, Krueger said.

“We will keep refining the details,” Krueger said.

An initial open house was held May 4, to garner feedback from the community though it wasn’t requested or required by the city, Krueger said. Great ideas were received from the community and they are using that information as plans develop.

A public hearing for the annexation request can be expected sometime in July.

“You’ve got to develop the plan to talk to the city,” Krueger said. “But with a 20 year build-out, a lot can change.”

Krueger said that plans for the project have been publicly available for about the past four years. As details are solidified, more information will be released. 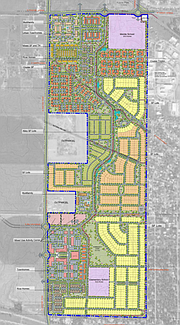 A master-plan aerial rendition of the Coeur Terre community from principle planner on the project, Connie Krueger.