My African violets brighten up the place.
Photo by ELAINE CERNY

We finally got the “GREEN LIGHT” to start planting those annuals. Of course, we still need to watch those forecasts. If the nights are going to be under 40, be very cautious. You don't want to lose those plants you've spent good money on and babied for weeks to suddenly turn black.

When did we move to Seattle? It seems like all it's done lately is rain. Most of the West would love to have our moisture as the majority of it is much dryer than normal.

Go ahead and choose your plants to go into your containers using the old mantra: a thriller, a filler and a spiller. If you've forgotten, this just means a tall plant and spreading plant and one that hangs over the edges. Make sure all three plants have similar sun/shade appetites.

Hanging baskets are similar in some respects but they don't need the “thriller.” Just the other two will work fine. Using a good sized basket is a good idea as it should last longer between waterings. Eastern locations are easier to work with as you won't have to fight those hot afternoons in the sun.

There are things leafing out all around us. Lots of trees and shrubs and many of these are in bloom. What a pretty time of the year! If you have things that are getting too big, they may need some pruning. Don't get carried away by cutting off too much. The rule to remember is never cut more than a third off any plant at a time. This means anything that grows, including trees.

I hope your resident hummingbirds have arrived. We have a pair who showed up about a week later than usual. They are the Calliope type which are the smallest migrating birds in the U.S.

We will occasionally see two other kinds of hummers in our area. These are the Roufus and the Black-Chinned.

All of them enjoy feasting on sugar water. Be sure to change if often and avoid the store bought stuff. It's easy to make your own…just boil 1 cup of water and stir in 1/4 cup of sugar until dissolved. Change it every few days, more often when it's hot out.

Let's see if you know this one…”Why do hummingbirds hum?” Because they don't know the words!

Elaine Cerny has gardened most of her life, starting in 4-H. She has belonged to garden clubs in three states and is currently an active member of the River City Gardeners Club in Post Falls. Her column has appeared in The Press every other Sunday from early March until late October for the past 14 years. 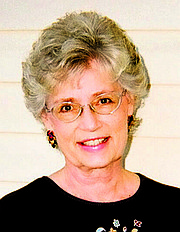