JASON ELLIOTT/Press Coeur d'Alene Lumbermen hitter Cooper Erickson beats out a relay throw to first base during the third inning of Saturday's first game in Class AA Area A best-of-3 series against Lewis-Clark at Thorco Field.

COEUR d’ALENE — The Coeur d’Alene Lumbermen and Lewis-Clark Twins split the first two games of a best-of-3 series for the Class AA Area A title at Thorco Field on Saturday, forcing a deciding game today in Lewiston.

Cruz Hepburn hit a two-run home run in the first inning of the first game for Lewis-Clark (19-16), which beat the Lumbermen 8-4 in the first game. In the second game, Ryan Schneider, Joe DuCoeur and Cooper Larson drove in two runs each as the Lums (30-9) won 11-4 to even the series.

Game 3 is today at Harris Field at Lewiston, tentatively scheduled for 4 p.m. Lewis-Clark is hosting the Class A Area A tournament championship game against the North Idaho Lakers at 1 p.m.

Brice Bensching hit a two-run double in the third inning of the first game for Lewis-Clark. Troy Shepard struck out nine for Coeur d’Alene, but walked three.

“They’re a good hitting and dangerous team,” Coeur d’Alene coach Darren Taylor said. “Troy’s control was a little off today and strangely he got a lot of pitches up and they took advantage of that.”

“Ryan pitched really well,” Taylor said. “Joe hit a line drive down the right field line and was flying around the bases. He’s just one of a kind.”

The teams split their four games during the regular season.

“We didn’t take care of business like we should have,” Taylor said. “Here we go. We’ll see if we can’t get it done tomorrow.”

SPOKANE — Joseph Cohen had three hits, two RBIs and two runs scored for the Lumbermen 17U in a win over the Lumbermen 16U in a semifinal game in the Washington state AA tournament at Al K. Jackson Field.

The 16U team (32-13-1) plays today vs. Colville at 11 a.m. in a loser-out game, needing two wins to advance to state. That winner plays the Gonzaga Prep-Shadle Park winner at 4 p.m. for the district’s third berth to state in Selah, Wash., beginning July 23.

Nolan Christ had a two-run single in the second inning for the Lums 17U. Isaac Ziegler, Calvin Coppess and Paxon Bunch scored two runs each in the win.

Mark Holecek had an RBI single for the Lums 16U.

Mead beat Shadle Park 12-8 to advance to the title game and earn a state berth.

LEWISTON — Trevor Brackett had a two-run single in the second inning and Zeke Roop struck out 11 over 5 2/3 innings as the second seeded North Idaho Lakers eliminated the top seeded Northern Lakes in the Class AA Area A tournament at Harris Field.

JASON ELLIOTT/Press Coeur d'Alene Lumbermen hitter Cooper Erickson beats out a relay throw to first base during the third inning of Saturday's first game in Class AA Area A best-of-3 series against Lewis-Clark at Thorco Field. 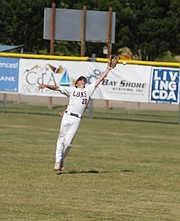