Favorite movies of (another) pandemic year

Mitchells vs. the Machines

With patience comes reward. And indecision.

So many critics deliver Top 10 lists in late December, often populated by movies that still aren’t available to the majority of audiences across the country. Why? The Academy Awards won’t announce nominees until Feb. 8, and the ceremony won’t happen until March 27.

If nothing else, this year’s late Oscar schedule provided justification for this critic to utilize the month of January for some 2021 movie catch-up.

Outside the performance of superhero movies like “Spider-Man: No Way Home,” pandemic concerns kept many moviegoers away from theaters again this past year (even this critic can count his theater attendance on one hand). Luckily, accessing great movies at home has never been easier, and I personally ended up watching more movies than ever before (thanks, media credentials!).

Don’t call this article a “Best of” list. Consider these my personal favorites from an especially strong year that marked the return of some of our most distinct and masterful filmmakers, including Steven Spielberg, Jane Campion, Guillermo del Toro, Ridley Scott and the unrelated Andersons — Wes and Paul Thomas.

However, for the first time in 15 years at The Press, I couldn’t actually rank my favorites from the past year. All my favorites seemed too different to arbitrarily measure them against each other. Call it a copout. Call me a coward. I just couldn’t do it.

In any case, I’ve listed my Top 10 alphabetically, followed by another alphabetical list of titles ranked in the 11-20 range. Plus there’s a special prize for a belated 2020 title that I saw far too late to mention last winter, as well as a list of honorable mentions. Indecision everywhere.

This devastating drama from Bosnia was nominated for Best International Feature at last year’s Academy Awards. However, the movie didn’t get released in the United States until March 2021, and I didn’t watch it until it landed on the Hulu streaming service in April.

Written and directed by Jasmila Žbanić, “Quo Vadis, Aida?” dramatizes the moments leading up to the 1995 genocide connected to the Bosnian War, all told from the viewpoint of a desperate teacher-turned United Nations translator (a superb Jasna Đuričić) who combats bureaucracy and ambivalence from outside forces in order to secure safe passage for her husband and grown children out of the country.

“Quo Vadis, Aida?” is difficult viewing but a compelling and impeccably crafted piece that serves as a haunting document of shockingly recent history. Still streaming on Hulu.

Few directors can frame an image with as much precision as Wes Anderson, the “Royal Tenenbaums” filmmaker who continues to hone his meticulous, unrivaled style across increasingly elaborate backdrops. An anthology inspired by “The New Yorker” magazine and its writers, “The French Dispatch” explodes with manic detail that finds room for complex visual gags, surprising emotional flourishes and just about every famous face in Hollywood.

Some describe it as the “most” Wes Anderson movie, which, for some reason, comes with a negative connotation. Nobody else could make a movie quite like “The French Dispatch,” and, in a world where 95 percent of movies look the same, it’s an approach that should be celebrated. Available on video on demand (VOD).

Astonishing visuals, perplexing encounters and a thorough deconstruction of hero’s journey tropes populate this enchanting adaptation of the Arthurian tale, “Sir Gawain and the Green Knight” from writer/director David Lowery (“A Ghost Story”). Dev Patel commands the screen throughout a movie that delights in taking unexpected turns, right up to its thrilling final 10 minutes. Available on VOD.

After the studiously constructed (and equally brilliant) “Phantom Thread,” Paul Thomas Anderson makes a drastic shift into “hangout movie” territory with “Licorice Pizza,” a film packed with delightful mini-conflicts shaped around a very specific depiction of 70s-era Los Angeles. Alana Haim and Cooper Hoffman shine in intoxicating, star-making roles, and Bradley Cooper walks into the movie for 10 minutes to deliver a legendary comic performance. In theaters.

The Mitchells vs. the Machines

A misfit family takes on the robot apocalypse in this hilarious and surprisingly nuanced animated adventure that frontlines a generational battle between technology and analog human relationships. Bursting with vibrant action, huge laughs and well-pronounced character conflict (especially between a creative, screen-obsessed teenager and her old-fashioned father), “The Mitchells vs. the Machines” is both socially urgent and broadly entertaining. Available on Netflix.

An existential fantasy-drama with some of the most quietly moving moments in cinema this year. Writer/director Edson Oda (making his feature debut) plays in a supernatural world reminiscent of Pixar’s “Soul,” with “Black Panther” and “Us” breakout Winston Duke starring as an analyst who determines which candidates will be given the opportunity to be born and given a human body (No special effects here — the candidates are all embodied by actors, including welcome faces like Zazie Beetz and Tony Hale). Despite the ethereal premise, “Nine Days” is a deftly written chamber drama about how people choose to embrace life. Available on VOD.

Making his feature directorial debut, Michael Sarnoski deploys a never-better Nicolas Cage in a delightfully unpredictable movie about passions, expectations and pig friendships. Cage plays an elite chef-turned reclusive truffle hunter, and the movie’s quiet power reveals itself once a bloodied Cage explains to a former protege that “We don’t get a lot of things to really care about.” Available on Hulu.

The Power of the Dog

Probably the true “Best Picture” of 2021 in terms of craft, Jane Campion’s “The Power of the Dog” is a gorgeous masterclass in tone and economical storytelling. Benedict Cumberbatch plays a cold-hearted cowboy in early 20th century Montana who takes a special interest in tormenting his brother’s new wife and teenage son (Kirsten Dunst and Kodi Smit-McPhee). Why he does so unspools in subtle, enthralling ways, and the final 30 minutes encourages an immediate and deeply satisfying rewatch. “Dog” includes the best performances of the year, hands down, led by an incomparable turn by Cumberbatch. Available on Netflix.

French filmmaker Julia Ducournau makes almost no attempt to ease audiences into the delirious world of “Titane,” opening with shocking sexual and violent content (this is the movie you’ve heard about in which the main character, played fearlessly by Agathe Rousselle, appears to be impregnated by a car). That first act serves an important purpose as the movie settles into a vibrant and urgent character study in the second half. The Palm d’Or winner from last year’s Cannes won’t be for most audiences, but it’s unforgettable and essential for those who do stick with it. Available on VOD.

Start with two of the best actors of our generation in Denzel Washington and Frances McDormand, add unparalleled production design and gorgeous black-and-white cinematography, plus a filmmaking giant in Joel Coen, and it’s pretty easy to understand how “The Tragedy of Macbeth” lands on this list. Oh yeah, the story is (expletive deleted) Shakespeare. Available on Apple TV+.

As someone who was extremely skeptical of the decision to remake “West Side Story,” I can’t help but marvel at how Steven Spielberg and screenwriter Tony Kushner managed to make such an essential and spectacular interpretation. In fact, with its subtle story changes, expanded scope, expertly-crafted musical numbers and star-making turns from the likes of Rachel Zegler, Ariana DeBose and Mike Faist, it's fair to call this film the definitive “West Side Story.” Now people just need to see it. In theaters (barely).

An aggressively absurd comedy with loud, wild performances (including two different ones from co-writer Kristen Wiig), “Barb and Star” is the vibrant, goofy movie that offers temporary respite from the horrors of the real world. The movie gets funnier and funnier on every viewing, but Jamie Dornan’s musical performance of “Edgar’s Prayer” is an all-timer. Available on Hulu.

Stellar performances and rich specificity elevate this coming-of-age drama about the hearing teenage daughter to two deaf parents. Her love of singing forces her to reconsider her established path in the family fishing business. Emilia Jones, Marlee Matlin and Troy Kotsur lead the excellent ensemble in this warm-hearted crowd pleaser. Available on Apple TV+.

Joyous from start-to-finish, Jon M. Chu’s boisterous adaptation of the Lin-Manuel Miranda stage show properly showcases the vitality and endurance of the movie musical. Now, if we could only get modern audiences to actually watch these movies… Available on HBO Max.

Made in the middle of peak-COVID production restrictions, Natalie Morales and Mark Duplass play strangers who form a unique friendship over Spanish-language lessons that take place thousands of miles apart via video conference. The actors wrote the movie together and Morales directs an engrossing dramedy that defies its lo-fi approach. Available on VOD.

Ridley Scott’s ambitious, multi-perspective medieval drama offers surprisingly deft modern relevance, helped along by a potent and distinguished performance by Jodie Comer. The three-part script (from acclaimed filmmaker Nicole Holofcener, as well as co-stars Matt Damon and Ben Affleck) layers plot information and character shifts in surprising and dramatic ways throughout. It’s a heavy movie, but it deserves extra points for making time for a delightful/nefarious turn from Affleck. Available on HBO Max.

A refreshingly small-scale story from Pixar about childhood friendship, bicycle races and the complications of being secret sea monsters. Lovely to look at (as most Pixar movies are) “Luca” serves as a welcome break from the studios recent focus on sequels and existentialism. Available on Disney+.

An impressive directorial debut from actress Maggie Gyllenhaal, “The Lost Daughter” balances two different timelines to explore the pressure and anguish of motherhood, all through the eyes of a vacationing college professor (Olivia Colman and, in flashbacks, Jesse Buckley) who bleeds deep-seeded guilt onto another young mother, played by Dakota Johnson. Colman, a recent Oscar winner for 2018’s “The Favourite,” continues to prove that she’s the best in the business. Available on Netflix.

Another tough-but-deeply rewarding viewing experience. Written and directed by Fran Kranz (an actor known from “The Cabin in the Woods,” the TV-series “Dollhouse,” etc.), “Mass” is a single-location chamber drama about a pair of couples who agree to meet some time after the violent deaths of their children in a school shooting. You won’t find more affecting and devastating performances than the quartet on display here — Ann Dowd, Martha Plimpton, Jason Isaacs and Reed Birney. Available on VOD.

Mixing historical fiction with the aesthetics of a horror movie, director Pablo Larraín (“Jackie”) explores the (hypothetical) psychological battle inside Princess Diana on the eve of her divorce. Kristen Stewart nails the infectious spark and warmth of Diana even as she faces down relentless and suffocating royal pressure. Available on VOD.

Tyler Wilson is a member of the International Press Academy and has been writing about movies for Inland Northwest publications since 2000, including a regular column in The Press since 2006. He can be reached at twilson@cdapress.com.

Photo courtesy of A24 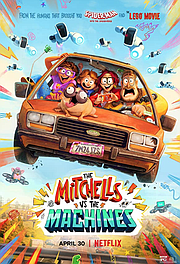 Mitchells vs. the Machines