Barnes was elected to the NIC Board of Trustees in 2020.

Barnes attended a remote NIC Board of Trustees meeting in November 2020, shortly after he was elected to the Zone 5 seat. Press file.

UPDATE (11:45 a.m.): Michael Barnes has resigned from his role as a trustee on the North Idaho College Board of Trustees.

In a statement to the college, Barnes said:

“It is with regret that I must announce my resignation immediately as I do not wish to allow my residency status to be yet another distraction for NIC.”

Barnes has not yet clarified his residency status.

Idaho Code states that any community college trustee vacancy will be filled by appointment by the remaining members of the board of trustees.

Any person appointed must reside in the trustee zone where the vacancy occurs and shall serve until the next trustee election.

The trustees are expected to discuss this board vacancy at the next board meeting scheduled for Jan. 19.

This is a developing story.

COEUR d’ALENE — Prominent community members are calling for North Idaho College Trustee Michael Barnes to resign after they said they uncovered evidence that he isn’t a Kootenai County resident — or even a resident of Idaho.

The group says public records show that Barnes may have established legal residency in South Dakota, a domestic tax haven.

This isn’t the first time Barnes’ residency has come under scrutiny.

Community members raised concerns last year over whether Barnes and fellow NIC Trustee Ken Howard remain qualified to continue in their positions based on residency requirements.

Trustees voted unanimously in December to authorize the college attorney to engage with the Idaho Attorney General to investigate the issue.

Howard — who owns a home in Kootenai County, as well as a home in New Mexico — made the motion.

Under Idaho Code, a vacancy occurs on a community college board “upon the incumbent ceasing to be a resident of the district for which he or she has been elected.”

“We either need more insight into this issue or he should resign,” Hazel said. “This is an untenable situation. He can’t continue to let these questions linger while (NIC is) at risk of losing accreditation.”

Hazel is one of a group of local residents who have called on Barnes to resign from the NIC board of trustees immediately or face litigation seeking his removal.

If Barnes does not resign by the end of business on Jan. 17, Hazel said her group will sue him. Injunctive and monetary relief will be sought.

“Domicile” refers to someone’s permanent home — the center of their personal and business life. A person can have multiple residences but only one domicile.

The Idaho State Tax Commission specifically notes that “snowbirds” who own no property in Idaho and live a nomadic lifestyle are still Idaho residents, as long as they have no intention to establish a new domicile elsewhere.

SDRC advertises itself to retirees, snowbirds and others who live nomadic lifestyles who are looking for “a friendly state to call home for tax and domicile purposes.”

South Dakota has no state income, pension, personal property or inheritance tax, making it a popular tax haven for travelers.

“It’s alarming to think we may have someone serving on our taxing board who’s doing what they can to avoid taxes in our state,” Hazel said.

To become a resident of South Dakota, an individual has to stay one night in the state and obtain a driver’s license.

Individuals can obtain a physical address via SDRC’s personal mailbox service and stay overnight at its campground.

SDRC also helps individuals organize the necessary documents to bring to the DMV in order to obtain a South Dakota driver’s license.

One such document is an affidavit affirming that the individual intends to domicile in South Dakota and does not maintain a principal residence in another state.

It is unknown if Barnes has a South Dakota driver’s license.

A retiree, Barnes appears to have few ties to Idaho. He’s registered five vehicles in South Dakota since 2019. A few remaining Idaho vehicle registrations will expire this year.

It is unclear if Barnes is registered to vote in Idaho.

Regan said Barnes retired from his professional career, sold his house and leased a portion of a house 500 feet away, where he receives mail and “otherwise meets all the legal requirements for residency.”

“He and his wife then embarked on a long planned, and much anticipated, RV vacation,” Regan wrote.

Barnes remained on the NIC board of trustees, Regan said, because his residency status had not changed and he was able to attend board meetings remotely.

Regan said Barnes resigned from the KCRCC because the group did not have the capability for remote meetings.

On Barnes’ behalf, Regan published a redacted bank statement from October 2021 in order to show an Idaho address. However, no other physical addresses in Idaho are currently linked to Barnes.

“I was unconvinced,” Hazel said, emphasizing that Idaho residency is determined by intent, not solely by address.

The Patriot Act prohibits mailbox service addresses, like the ones Barnes appears to use in South Dakota, for banking.

Hazel said common advice for nomads is to use a friend’s address or rent a room for banking purposes.

“What he’s doing is a completely legal endeavor in South Dakota,” Hazel said. “I don’t begrudge him seeking freedom. But he shouldn’t be serving on a taxing board representing our community if he doesn’t intend to live here.”

Former Idaho State Sen. John Goedde, who represented the Coeur d’Alene area from 2002 to 2014, was one of more than a dozen community members who signed an open letter demanding Barnes’s resignation.

“I believe that Michael Barnes is no longer in a position to serve his term as a trustee on the board,” Goedde told The Press on Tuesday. “The longer this festers, the more opportunity for votes that may not stand a legal test if he’s a deciding vote.”

While currently in good standing, NIC’s accreditation is under review by the Northwest Commission of Colleges and Universities (NWCCU), the accrediting organization for the college.

A site visit is planned for Jan. 18, following multiple complaints about the conduct of NIC’s board of trustees.

“If (Barnes) is not a resident of this state and not eligible to serve on the board, he should not be sitting in an interview with the accrediting organization,” Hazel said.

NIC has maintained accreditation through the NWCCU since 1950.

Accreditation makes the college eligible for federal financial aid and allows more opportunities for credits to transfer to other institutions.

Hazel said Barnes owes the community answers to their questions about his residency. He has steadfastly refused to answer questions from The Press.

Where will he file his taxes? Where is he licensed to drive? Where is he registered to vote? Is he a snowbird or a South Dakotan?

These are questions Barnes has thus far declined to answer.

“I find it extremely troubling that we haven’t heard from Mr. Barnes on this issue,” Hazel said.

Hazel and other community members have asked the Idaho Attorney General to verify Barnes’ residency.

“We must figure this out — and we intend to,” Hazel said. “It’s imperative.”

The letter calling for Barnes’s resignation is as follows:

What’s the difference between an absent Idahoan visiting warmer climates for the winter and a South Dakotan? Intent, according to Idaho law.

The law is clear regarding intent to reside in both states. The public has a right to know in which state Michael Barnes intends to reside. Where is he registered to vote? Where is he licensed to drive? Where will he file taxes? When his camper registration in South Dakota expires at the end of the month – in which state will he renew?

We have asked Idaho Attorney General Lawrence Wasden to utilize the full power of his office to verify Michael Barnes’s actual residency. Idaho should seek all documents relating to this question in South Dakota.

According to Idaho Code § 59-901(e), a vacancy occurs on a community college board “upon the incumbent ceasing to be a resident of the district for which he or she has been elected.”

Idaho Code § 63-3013 defines “resident” in different ways depending on situation, including those who travel a nomadic lifestyle. The Idaho State Tax Commission provides that ‘snowbirds’ can be absent from the state, and still be considered a resident, as long as there is “no intention to establish a new domicile.”

Presently, Barnes has very few ties to North Idaho beyond a relative and a rented room. He sold his home in June 2021. He resigned from the Kootenai County Republican Precinct Committee, citing a move and/or the desire to travel. A few remaining Idaho vehicle registrations will expire this year.

KCRCC Chair Brent Regan provided an October bank statement on Barnes’ behalf to show an Idaho address but that is unconvincing as to intention to reside in Idaho. Barnes registered three vehicles in South Dakota during the same timeframe.

A heavily redacted lease agreement was also provided by Mr. Regan. Residency is determined by intent, not by mere address. The Patriot Act prohibits mailbox service addresses, like the ones Barnes is using, in banking. Nomads like Barnes suggest using an address at a friend’s house or “renting a room” for banking purposes.

Idaho Code § 6-602 provides “action may be brought in the name of the people of the state against any person who usurps, intrudes into, holds or exercises any office or franchise, real or pretended, within this state, without authority of law.”

Michael Barnes appears to be usurping his position by remaining on the board if he intends to reside in another state. He jeopardizes college accreditation and creates unacceptable liability with unknown complications. The questions around his residency now involve two states, tax laws, the Patriot Act, banking laws, and numerous complicated legal scenarios.

The accreditation commission will conduct interviews with college representatives on January 18. Now, the NIC Board must defend why one of their members appears to have been methodically taking steps to change his residency to South Dakota.

Barnes must resign immediately or face litigation seeking his removal. If resignation is not received by end of business day, January 17th, Barnes should prepare for personal litigation. We believe swift action is necessary to protect North Idaho College from further damage and loss of accreditation. Injunctive and monetary relief will be sought. Barnes should not be entitled to a publicly funded legal defense if South Dakota records confirm he intends to reside in that state.

Barnes attended a remote NIC Board of Trustees meeting in November 2020, shortly after he was elected to the Zone 5 seat. Press file. 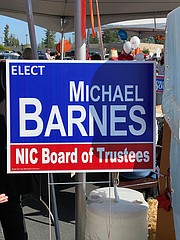 Barnes was elected to the NIC Board of Trustees in 2020.