COEUR d’ALENE — The daycare system has reached a breaking point.

The problem isn't new, but the pandemic has highlighted a struggling system, said Mark Tucker, executive director of the United Way of North Idaho.

“It’s in such a chaotic state right now and so many pieces have caused it to falter,” Tucker said. “Once COVID hit, everybody noticed it.”

“The picture I have of it is that early child care, specifically, is a bottleneck for a lot of people getting back into the workforce,” Wolkenhauer said. “It doesn’t scale up, it’s expensive and it’s hard to find workers.”

The factors affecting the child care dilemma range from a lack of providers and low staff wages to the burden of expense for working families. Several centers closed in the past year, including ABCD Daycare's Coeur d'Alene branch, which had been open for decades and provided care for 100 children.

“It’s good that it’s getting all of this attention,” Tucker said. “But it’s something that should have been done years ago.”

Coeur d’Alene City Clerk Renata McLeod, who manages licensing for daycare centers in the city, blames the labor shortage, in part, for the child care crisis, though it isn’t unique to the industry.

“There are so many job opportunities out there, so competition for the workforce is strong,” McLeod said. “We need to find those who have a passion for the industry.”

Child care staff typically earn low wages yet are required to have specialized licensing and training. Discovery Christian Dayschool pays about $11 per hour, said director Katrina Floyd, which is average pay according to United Way statistics.

Low wages sometimes lead to high staff turnover, Tucker said, which does not create a stable environment for children. Staff shortages often lead to stress and emotional burnout, he said.

Parent Angela Covarrubias’ daughter Lovlee, 3, attends ABCD Daycare's Hayden center. Previously on the waiting list for six months, Covarrubias said the care her daughter has received has been of the highest quality.

“If we could not find child care, my husband and I wouldn't both be able to work; it would be a one-income household and would be extremely hard for our family,” she said. “In the world we live in as middle-class citizens, it’s imperative for both parents to work."

At Discovery Christian in Coeur d’Alene, the trouble isn’t retaining staff, but hiring additional workers, Floyd said. The center wants to hire two more teachers but hasn’t had any applicants.

“Part of it is the wages. A lot of fast food restaurants are paying $15 an hour, so that’s difficult,” Floyd said. “And in order to work in child care, they have to get a license so they have to pay for first aid and CPR and all of the training.”

Discovery cares for about 54 children with a capacity for 72. Discovery has a full-time staff of nine, and some have worked there for decades. Thirty-five children are on the waiting list, mostly infants. Many daycare centers don’t take children younger than 3.

A family with an older sibling at the school placed their infant on the waiting list before he was even born, Floyd said. After two years, Discovery finally had an opening for him.

The cost of child care is a dilemma for families and for providers, United Way of North Idaho community impact director Keri Cederquist said.

“One of the key things I want to emphasize is that the cost dynamic is a sticky situation,” Cederquist said. “Providers are charging basically exactly what they can to keep afloat and it’s already pricing middle class families out of the market.”

On average, providers charge between $750 and $1,000 per child, per month. At Discovery, most families have two children and pay about $1,200 a month for both, Floyd said. The work is labor intensive and deserves higher pay, but child care providers can’t afford to pay higher wages because that cost is passed onto families.

“A couple things make child care really tricky to solve,” Wolkenhauer said. “One is that they can’t expand their capacity really easily.”

Regulations dictate the ratio of children per staff member and the required square footage needed to serve a limited number of children.

“When they lose a worker, that instantly slashes how many kids they can serve,” Wolkenhauer said. “It’s not like a restaurant where someone can work another shift or work harder.”

Many child care workers are moving to the hospitality service industry, Wolkenhauer said. The wages are similar or better and the work is easier for some.

While many people left the workforce because of COVID, the labor force has recovered “more robustly for men than for women,” Wolkenhauer said.

A lot of that comes down to having child care.

With 44 child care providers currently licensed within Coeur d’Alene city limits, the number is not increasing as quickly as the population is growing, deputy city clerk Kelley Setters said.

City officials are cognizant of the situation and have been working for years to create solutions, McLeod said.

Since the pandemic began, changes made to licensing regulations are encouraging for child care providers. In-home caregivers can now have one employee, increasing the number of children they can serve. During the height of the pandemic, a regulation change allowed care providers to take children outside to play in shifts if the available play space was smaller than previously required.

United Way is also working to support parents while partnering with businesses to address the daycare dilemma.

“It has to change and it is changing,” Cederquist said. 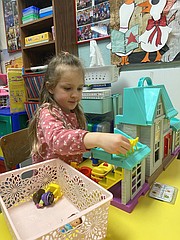