MARK NELKE/Press Lake City High baseball coach Paul Manzardo pays a visit to the mound during a game in the 2022 season.

COEUR d’ALENE — There are family reasons, and then there is this.

His wife, Windy, 49, needs a heart transplant, and he needs to be nearby.

“With Windy’s diagnosis, it would have been too hard to try to coach, taking care of her, doing my job at NIC … it would be too much on my plate,” said Manzardo, 52. “I had to let something go. And I just felt it was important that I focus more time on my family than baseball right now.”

Windy, a Clark Fork High graduate and a cardiac nurse, was diagnosed some six months ago with sarcoidosis, an autoimmune disease which has attacked the electrical system of her heart.

She (and Paul) need to be within three hours of Providence Sacred Heart Medical Center in Spokane, should they receive the call that a heart is available for her.

“I respect the heck out of the decision that he made, and I told him that,” first-year Lake City athletic director Troy Anderson said. “He’s doing the absolute right thing for his family and himself. That was a tough decision for him to make, but it’s a no-brainer, to be honest. Family’s got to come first. Paul is part of our family, and we’re going to rally behind him, whether he’s coaching or not. He’s going to find a lot of support from our T-Wolf community in this situation.”

Manzardo was 74-65 at Lake City. In his first season (2016), the Timberwolves won the second state title in program history. Lake City also reached the state play-in game twice under Manzardo.

Lake City finished 11-12 this past season, 5-7 in the Inland Empire League.

“I didn’t want to be a distraction (as baseball coach),” Manzardo said. “We have a really good group of young kids, and they have a chance to do something special in the next couple of years, and I didn’t want to come in the way of that, by not being able to give 110 percent.”

“We’re exploring our options, doing what’s best for the program, short and long term,” he said.

Born in Flint, Mich., Manzardo played at Powers Catholic High in Flint, then was a middle infielder at Ferris State in Big Rapids, Mich.

He attended graduate school at the University of Idaho, which is where he met Windy.

He then was an assistant baseball coach at North Idaho College for a couple of seasons, and was head coach for five seasons (1998-2002), before the program was cut for budget reasons. Manzardo coached Little League for more than a decade, and was an American Legion baseball coach for several years.

Paul and Windy’s two sons are still playing baseball — Kyle in the Tampa Bay Rays organization, and Marcus as a sophomore at Community Colleges of Spokane.

Manzardo has worked at NIC the past 29 years, and is currently division chair for physical education and resort recreation management at the school.

When Lake City needed a baseball coach seven years ago, after the previous coach, Travis Georgius, resigned to pursue a career in firefighting, then-Lake City AD Jim Winger “twisted my arm” to get Manzardo to take the job, Manzardo said.

“I thought he’d be a good fit for us, perfect for what we needed, and it turned out to be a pretty good decision,” said Winger, who retired as an educator last spring, but remains the school’s boys basketball coach. “He’s done a great job, and is just a very hard worker, on everything he does … he poured a lot of heart and soul into the program, and we were very fortunate to have him.” 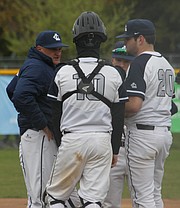 MARK NELKE/Press Lake City High baseball coach Paul Manzardo pays a visit to the mound during a game in the 2022 season.