An entry in the Athol Daze Parade gave a nod to hunting.

Athol’s Citizens of the Year Gary and Cindi Devine ride a Harley-Davidson in the Athol Daze Parade.

Veterans prepare to carry the flags before the Athol Daze Parade on Saturday.

But Saturday morning, the 91-year-old watched it from his front yard with daughter Terre Brammer to his right and son David Harms, also a veteran, to his left.

“A great day,” said Doug Harms, who was about as popular as the parade itself, with people stopping to say hi and chat with him. He is kind of a big deal for good reason.

“I've been here since the population was 37,” Doug Harms said.

Harms served in both the Army and the Navy and is the pride of the family.

“He did well,” Brammer said.

He can’t get around like he once could, but he still summoned the strength to come out for the town’s summer party.

The 30-minute parade enjoyed clear, sunny skies as it made its way down Highway 54 toward City Park. The theme was "Hometown Pride Athol Wide" and it showed.

Hundreds of adults and kids lined both sides of the roadway and cheered for veterans carrying flags, grannies with flowers in their hair, women riding horses and Junior Tackle footballers marching and chanting.

Pretty much everyone tossed candy to kids, who were happy to chase it down, with some vehicles stopping so toddlers could run out to claim the sweets.

“Lots of kids and we’ve got lots of candy,” said a smiling Caren Crumpacker with American Legion Auxiliary 149 as she gave out handfuls of treats to kids like 4-year-old Whitley Wagner, who was quickly filling a plastic bucket.

Athol’s Citizens of the Year, Gary and Cindi Devine, rode a Harley-Davidson on the parade route. Both offered a few words as they cruised along.

Marty Radenz was wearing a colorful pink golf outfit as he pedaled and towed a golf cart, throwing out plastic colored golf balls.

The pink was a nod to efforts to raise money to battle cancer and the clubs a sign of a favorite sport.

“I still like playing golf the old-fashioned way," he said.

Sheryl McDaniel, Jeri Groth and Florence Brown, all with the Spirit Lake Grandmothers' Club, were having a terrific time as they waved to friends watching from the sidelines.

Mike and Peggy Cutler were also beaming with pride as their fully-loaded Cutler Logging truck was driven by son Mikey, with wife Casey at his side and grandchildren Colton and Harrison along for the ride.

The celebration continued at City Park and included a car show, live music, bed races and food and crafts.

Athol Baptist Church was back to defend its 2021 bed-race title.

Their secret to speed? 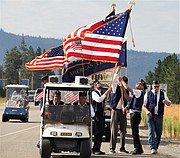 Veterans prepare to carry the flags before the Athol Daze Parade on Saturday.

Athol’s Citizens of the Year Gary and Cindi Devine ride a Harley-Davidson in the Athol Daze Parade.

An entry in the Athol Daze Parade gave a nod to hunting.