Courtesy photo Shayla Hall and Karyn Sullivan are owners of Simply Being Bazaar, which has opened at 510 N. Fourth St. in Coeur d'Alene.

The curved projector screens are 18X10 and will be open 10 a.m. to 10 p.m. daily with owners Taylor Vold and Thomas Tedder. Foods and beverages are available with gourmet pizza, hot dogs, sport drinks, beers and wines.

With a large variety of items, things to eat, teas and coffees, Simply Being Bazaar has opened at 510 N. Fourth St.

A little bit hippie, metaphysical and fun to browse, items are often locally crafted, organism natural and include jewelry, gift baskets, plants, oils, pottery, books and cards with some for physical and spiritual personal protection.

With a variety of seating options for 90 inside and on a patio, the large place has a fireplace and options for online ordering, to-go and curbside pickup.

Now open by appointment with owners Mike and Leslie Emmons, hours will be 7 a.m. to 2 p.m. daily (with more anticipated). Phone 208-329-8325. Check www.kaffeemeister.com.

where I couldn't lose

Last Saturday I had a unique experience in which I went to a college football game where I couldn't lose. The University of Washington hosted the University of Montana, and I have degrees from both schools.

I arranged to sit in the eighth-story press box with media people from throughout the Northwest. I was going to wear a Grizzly shirt and a Husky hat, but instead I wore a "Coeur d'Alene" shirt to be literally middle of the road.

The 101-year-old stadium holds about 70,000 people and was at least half full despite the Covid scare. Many came from Montana to watch UM upset UW 13-7. I managed to not visibly or audibly root for either team. 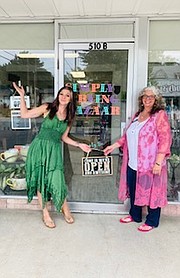 Courtesy photo Shayla Hall and Karyn Sullivan are owners of Simply Being Bazaar, which has opened at 510 N. Fourth St. in Coeur d'Alene.