Legislators gear up for special session

The November start date is a little overdue for Dalton Gardens Rep. Vito Barbieri but is "better late than never." Barbieri said the legislature needs to consider action against vaccination mandates to "protect the rights of employees."

"I think it is vitally important that we establish some exemption scheme to allow individuals to opt-out if their conscience does not want to take the jab," Barbieri told The Press Wednesday. "I'd love to accomplish that."

Members of the House voted to recess instead of officially ending the session on May 12. Abstaining from the usual sine die closure allowed lawmakers to reconvene at the call of House Speaker Scott Bedke.

On Tuesday, Bedke emailed lawmakers, outlining what they will consider. The proposed legislation is limited to the topic of vaccination mandates that would combat an executive order made by the Biden administration on Sept.9.

President Joe Biden announced last month all employers with more than 100 workers require staff to be vaccinated or tested for the virus weekly. Health facility workers, federal employees, and contractors must also get vaccinated, the order says.

Rep. Tony Wisniewski, R-Post Falls, said his primary concern when at the statehouse is "protecting the individual rights of employees against being forced under the coercion of losing their job to the so-called vaccine."

"First of all, this is not a vaccine in the traditional sense of the word," he told The Press Wednesday. "This is an experimental drug delivery system that we've been duped into believing is a vaccine."

Wisniewski said he believes the "individual rights" of citizens "trumps the interests of employers" and the government. He said he knows several individuals who have lost their jobs due to imposed vaccination requirements by their employers.

"I have real sympathy for those people who had enough courage to turn down something that could be dangerous to them and lose their livelihood in doing so," he said.

In September, Gov. Brad Little, Idaho Attorney General Lawrence Wasden, Bedke and Winder sent a letter to Biden threatening legal action if he did not rescind the order.

On Oct. 4, the state Committee on Federalism approved draft legislation to criminalize Biden's executive order being implemented by any Idaho public official or agency.

The bill, proposed by Dalton Gardens Sen. Steve Vick, is recommended for consideration by the full legislature. If approved, violators would be subject to misdemeanor charges punishable by up to six months in jail or a $5,000 fine.

"We need to come up with something to stop the jab and protect citizens from something that is flat out unconstitutional and wrong," Coeur d'Alene Rep. Ron Mendive told The Press. "I get lots of emails about this issue because people are worried, frightened, and frankly angry at the suspension of our constitutional rights."

Mendive said he's talked with several lawmakers who are hoping to pass legislation against vaccination mandates. Several vaccination deadlines set by Idaho employers have passed, Mendive noted, and more lurk in the future.

"This is very serious. Those deadlines are looming," Mendive said. "Hopefully, we can stop the bleeding to some degree from people losing their jobs right now."

The House Ways and Means Committee will meet on Nov. 15 to introduce legislation. To pass, bills must receive House, Senate, and executive approval.

"I anticipate there will be several bills and different tracks people will try to go down," Coeur d'Alene Rep. Paul Amador said. "They will have to have 36 votes in the House and 18 in the Senate to get across the finish line."

Representatives will also consider the House Ethics Committee's recommendation to censure Giddings, R-White Bird, and remove one of her committee assignments.

The censure comes from an ethics complaint filed against Giddings in May for posting the name and identity of a 19-year-old legislative staffer who accused former Rep. Aaron von Elinger, R-Lewiston, of rape. Censure requires a majority vote from House lawmakers.

"The idea that an internal House matter can be made into such a circus, there's something inappropriate about that," Barbieri said. "We're basically going to be airing our dirty laundry in public, and there has got to be a line there.

"There are due process, Fifth Amendment and confidentiality issues that have to be addressed meaningfully," he added. "The whole rule has got to be addressed and reconstructed, and that is something I am working on." 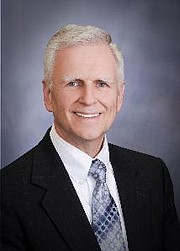