This image was posted Oct. 17 on a cloned "Save the Lakeland Way" Facebook page. The message attacks the owners of the Rathdrum McDonald's, who support the recall of Lakeland school board chair Michelle Thompson.
Photo courtesy of Facebook

The original Save the Lakeland Way Facebook page founded by Terri Skubitz, requesting the recall of Lakeland Joint School District board chair Michelle Thompson. A website and cloned Facebook page of the same name recently sprung up in support of Thompson.

Rathdrum McDonald's owner Terri Skubitz is the apparent target in this Facebook post. Skubitz launched a campaign in August to recall school board chair Michelle Thompson.

This image was posted Wednesday evening on a cloned Save the Lakeland Way Facebook page. 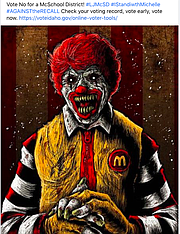 This image was posted Wednesday evening on a cloned Save the Lakeland Way Facebook page.

Rathdrum McDonald's owner Terri Skubitz is the apparent target in this Facebook post. Skubitz launched a campaign in August to recall school board chair Michelle Thompson.

The original Save the Lakeland Way Facebook page founded by Terri Skubitz, requesting the recall of Lakeland Joint School District board chair Michelle Thompson. A website and cloned Facebook page of the same name recently sprung up in support of Thompson.

With the election now a week and a half away, the recall battle has gotten personal.

Tim Skubitz served as a board member for 11 years and was replaced by Thompson two years ago. Skubitz responded graciously, said his wife, Terri, offering to help Thompson with the transition.

The couple, who own the McDonald’s restaurant in Rathdrum, now find themselves the personal targets of a Facebook page in support of Thompson.

“I never thought this would get so ugly,” Terri said.

Terri started a Facebook page called “Save the Lakeland Way” to get information out to residents about the Skubitzes' concerns with school board trustees and what's happening within the district.

“I am stunned at the aggressive and underhanded behavior,” Terri said. “This is about parents and concerned citizens wanting the best for their kids and the schools. We want to make sure that kids are at the center of the discussion.”

In an email to The Press, Thompson said she does not have anything to do with either the Facebook page or the website.

“I did not start the “savethelakelandway.com” site, nor did I pay for it,” Thompson said. “The image on the website is a picture of my sign which identifies who bought and paid for the signs, not the website.”

When asked if she knows who created it, Thompson said, “I assume it was someone or a group of people who are against the recall.”

Reasons Thompson should be recalled, posted on the original “Save the Lakeland Way” Facebook page, include: violations of the board member code of ethics, ignoring board policy, creating a hostile work environment, failure to respond to patron concerns, making a statement that school district trustees will not respond in writing to patron concerns, and a lack of confidence from the electorate in trustees representation.

The cloned Facebook page with the same name has images of a twisted Ronald McDonald with the words: “Don’t let these jokers disguised as caring business and community members steal your vote with their manipulation.”

Another shows Ronald McDonald with devil-horns holding a sign that reads, “I want your soul.” The caption underneath says: “Ronald doesn’t really want your soul. He wants the soul of the Lakeland students,” with the hash-tag #IStandWithMichelle.

Thompson said she can’t speak to the use of the McDonald’s imagery.

“As I do not oversee the site, I can’t offer an explanation,” Thompson said. “However, the Skubitz’s have tried to use their status within the community to advocate for the recall without any foundation of truth, they’ve used their McDonald’s reader board to support the recall and promote their “Save the Lakeland Way” Facebook page.”

Links on the cloned Facebook page take viewers to a website, Savethelakelandway.com, where the accusations against Thompson are refuted.

The site is written from what appears to be Thompson’s first-person point of view and includes a form where questions can be submitted. At the top of the contact form a statement says, “Get the facts! Ask Michelle.”

Thompson said she hasn’t done anything to advance her campaign to remain on the board of trustees. “I haven’t attended any functions, and I haven’t engaged in any political actions on my behalf,” she said in an email Wednesday.

With voting day fast approaching, campaign signs representing both sides of the issue can be seen all over town. That hasn’t gone smoothly, either.

Both camps claim that their signs have repeatedly been vandalized.

Craig Wirtz, a resident in support of recalling Thompson, estimates that close to 100 signs are missing with an estimated value of close to $500, he said.

“Our banner on 41 for the recall was damaged and what appears to be feces was spread on the post,” Wirtz said.

Tuesday night 28 signs were pulled up and dumped near McDonald’s in Rathdrum, he said.

Rathdrum Police confirm that at least one police report had been filed at about 9 a.m. Wednesday. Because the investigation is active, a sergeant contacted by The Press said he was unable to comment further.

Thompson said her signs opposing the recall have been “removed, pulled down and tossed to the side,” then replaced with “green and yellow recall signs.”

Wirtz and Thompson both told The Press they had filed police reports.

“I had nothing to do with her signs. Our campaign isn’t touching her signs,” Wirtz said.

Terri Skubitz said her original intent with “Save the Lakeland Way” Facebook page was to put together a group of concerned citizens.

“We got the signatures and got (the recall) on the ballot,” she said. “During that process we found that a lot of people in the community didn’t know, so we took the time to get the facts out there.”

All the claims about Thompson are backed up with video clips and written records, she said.

Both the Thompson and Skubitz families have been Rathdrum residents for many years.

“I hope that when this is all over that we can come together and heal this community,” Terri Skubitz said.