This photo of Two Gun Hart appeared in a 1951 Press article.

This photo of Two Gun Hart appeared in the Spokesman-Review.

But during the Prohibition era, 1920-1933, he was the most feared lawman in the Midwest. His hometown Nebraska newspaper of the day described Hart as “becoming such a menace in the state that his name alone carries terror to the heart of every criminal.”

Later, as a Bureau of Indian Affairs agent, he was credited with catching 20 murderers.

So, you can imagine how jaws dropped in North Idaho when the October 1951 edition of “News Week” hit the stands, revealing the real identity of the hard-nosed cop. He was the older, long-lost brother of Al “Scarface” Capone, Prohibition’s most notorious bootlegger.

The News Week article called Hart “the white sheep of the family.”

“A crack shot, he could knock off a beer bottle at 100 feet, firing from either hip,” News Week reported. “He never lost a fight. In Prohibition, Hart tracked down bootleggers in Nebraska and the Dakotas, sometimes averaging seven raids in one night.”

Hart’s given name was James Vincenzo Capone. He was born in 1892 in Italy and at age 16 left the family of seven brothers and two sisters in Brooklyn to join the circus and see the world. After fighting in France in World War I, he hopped off a train at Homer, Neb., (population 477) and began a new life.

Hart dressed like a cowboy from the silent movies, with a wide-brimmed Stetson, high-heeled boots, and a six-shooter slung low on each hip. In a Coeur d’Alene Press story on Oct. 20, 1951, Hart was described “as a tough officer who would not take a bribe.”

After his work as a prohibition officer, Hart served as a special BIA agent on a dozen reservations, including three in the Inland Northwest. Indian Country nicknamed him “Two Gun.”

He respected the language and culture of American Indians and earned their respect in return.

Hart was nearly 60 and almost blind when he was outed during a federal grand jury investigation into tax evasion charges against his brother Ralph “Bottles” Capone. Al Capone had died four years earlier.

In a letter to Julius N. Johnson of the alcoholic tax unit in October 1951, Hart wrote that he had fallen on hard times after leaving North Idaho. He nearly lost his eyesight when a moonshine still exploded. He lost many of his possessions in a flood. He lost one of his four sons in World War II.

But he cherished his work with North Idaho officers and the time he spent in the area. According to the Press story, he told Johnson: “It does a fellow’s heart strings good to have old friends backing you up.”

We need a clown running for president (besides the ones nominated by the two major political parties). Back in the day, when the Coeur d’Alene Chamber of Commerce booked celebrities to speak at its annual banquets (such as Rich Little, Phyllis Diller, and Norm Crosby) the Clown Prince came to town: Pat Paulsen. Oldtimers recall Paulsen as the stone-faced, double-talking commentator of the 1960s “Smothers Brothers Comedy Hour.” He ran satirical campaigns for president between 1968 and 1996. In October 1996, he told a chamber banquet crowd of 700 that we should declare war on Indian tribes: “They’ve still got land we haven’t taken away from them.” And he took the side of loggers in their ongoing fight with tree-huggers: “I’ve always thought the cause of forest fires was trees.” Digs at Bill Clinton, George Bush, and Ross Perot are dated now. But it was fun, unlike the toxic politics of today.

• Poet’s Corner: Smaller than a peppercorn/a mustard seed, a dot,/tiny as the little one/a Congressman has got – The Bard of Sherman Avenue (“How Small is a Bird Brain?”).

• Sign of the Times: An eye-catching, black-and yellow sign along Ninth Street, north of Homestead, warns: “SLOW DOWN: This is a neighborhood not a racetrack.”

• According to city code (8.36.110), as I read it, GOP partisans committed a no-no when they put their list of candidate endorsements on my car, parked at CdA Walgreens, Wednesday. The puppet masters know that. They also know that no one will do anything about it.

• Believe it or not, a caller asked the Kellogg PD about legal ramifications for raking his leaves into his neighbor’s yard, according to Sgt. Paul Twidt’s Roll Call report.

• Factoid: Seventy years ago, the circulation of Burl Hagadone’s Press was 5,662.

• Bumpersnickers (spotted at a Winco by Facebook Friend Tom von Alten on a blue Dodge van with Kootenai plates): “Always Be Yourself Unless You Suck.”

• We’re Number 50! Last Friday, a front-page headline in the Press read: “Idaho is the worst for safety from coronavirus.” At 1:36 that afternoon, a cheerful employee of Holiday Hallmark in Ironwood Square set up a sidewalk display advertising face masks at 50% off. Coincidence?

Larry Strobel will be remembered as the Music Man who in 1977, along with wife, Sharon, co-founded the zany Perfection-Nots marching band for Fourth of July parades. But Larry, who died July 13, was much more. In a letter to the editor on Oct. 19, 1996, Darlene Mason noted Larry’s retirement as a city mail carrier after 40 years: “In your lifetime, a few people who cross your path will make a lasting impression, not so much for what they say or works they accomplish, but just for the excellent example they set for others in their work and everyday lives.” She added, “Postal patrons on his route have all appreciated his promptness and his cheerful attitude, rain or shine.” What will they say about you?

D.F. “Dave” Oliveria can be contacted at dfo.cdapress.com.

This photo of Two Gun Hart appeared in the Spokesman-Review. 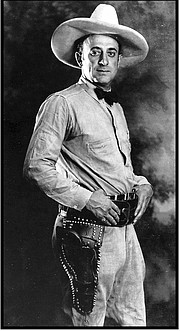 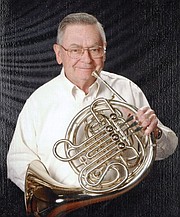