COEUR d’ALENE — Glen Seely is among those who don't support the Northern Lakes Fire District’s proposed $2 million permanent override levy that will go to voters on Nov. 2.

He has his reasons. And they’re centered around money.

“Maybe they need the money but at the same time, have they spent their money well? That's when, because of my skepticism, that's when I got their financial statements,” Seely said in a recent interview with The Press.

The district covers about 108 square miles of lakes, mountains, prairies and cities like Hayden, Rathdrum and Twin Lakes, with a combined population of more than 60,000 residents.

Seely, a retired East Hayden View Drive resident, earlier this year requested the district’s budgets for 2000, 2006, 2011, 2016 and the current year. He reviewed revenues, payrolls, and administration costs for those years.

Seely came to the conclusion the district isn’t spending money wisely and shouldn’t be entrusted with more.

He said its spending has unnecessarily climbed steadily. Because it's a fire district, not many are paying attention, he said.

“Taxpayers are not involved and do not see what's going on,” he said.

Riley told The Press the district has been more than upfront and transparent with its budgets. Levy funds would go toward 12 firefighters/EMTs and two support staff for a new fire station that would be built with capital reserve funds between Hayden and Rathdrum.

Riley has also told The Press the investment would improve response times and allow firefighters to keep up with an increasing number of service calls.

He said when the district was formed in 2000, it received about 670 calls a year. Today, it receives about 5,500 calls at stations in Hayden and Rathdrum and is trending toward 6,500 by next year.

“We are not able to keep up with the demand for service,” he said.

Voters rejected a Northern Lakes Fire District override levy proposal of $850,000 twice in 2019, first in May, and again in November.

A $1.2 million permanent override levy was rejected in 2018.

Northern Lakes Fire District also proposed a $1.6 million permanent override levy twice in 2012, in May and November, but voters rejected both.

Riley believes this time will be different.

He said the NLFD has operated with the same number of fire stations, engine companies and ambulances since its formation in 2000.

Seely has concerns about all of that.

Some of his key points regarding the district’s budget and levy proposal are:

"Did we have over twice as many fires and accidents, per person? Of course not," he said.

He says the district will receive about $1.4 million in 2021 from Kootenai County Emergency Medical Services System as reimbursements for ambulance responsibilities.

Seely notes that the proposed override levy of $2 million is a 34% increase in revenue and does not have an end date, which means it will cost $20 million over 10 years.

"Oh, and yes, the 3% increase will be based on this new base level," he said.

Seely would like to see the district consider combining with Kootenai County Fire & Rescue; form an independent committee to review the need for more money; do a better job of applying for impact fees for growth; apply for federal grants; staff a fire station in a rural area with volunteer firefighters.

“I will not vote for this override levy,” Seely said.

Riley, in response to Press questions, had this to say about Seely's concerns:

•He said the district board of commissioners has resolved each year to increase the budget by the statutorily allowed (up to) 3%.

• The district receives a small amount of revenue generated from sales taxes and new construction that goes on the tax rolls each year. The sales tax is never a guarantee and amounts to an average of $125,000 to $150,000 each year. Likewise, the new construction is never guaranteed but amounts to an annual average of approximately $125,000 per year.

“Since these are both never guaranteed, no, that is not enough of an increase each year," he wrote. "That is precisely why we are holding an override election."

Riley said the $2 million override levy is necessary because “if there was an end date, it would be temporary and could be for no longer than two years. We cannot hire the 12 firefighters, with a temporary override election, which would likely lead us to close a station, and the monies spent that we already budgeted for would be wasted."

He said new construction fees and sales tax revenue help, and they have used that to purchase/maintain/replace the trucks and equipment for first responders.

Regarding the district’s increase in budget and revenue from 2000 to 2021:

"The fire district has done an exemplary job of using moderate 3% increases to add additional personnel to our staff," Riley wrote. "Due to continued growth and increasing call volume, this levy is the only way for us to add the 12 FF's to staff an additional fire station."

Regarding rising payroll and benefits:

The district has worked over the years to bring wages and benefits up with what others provide in the region, Riley said. Between 2006 and 2016, it had 10 firefighters/medics leave for employment at another fire agency. Since 2016, it has not had a firefighter/medic resign. "We strongly believe this is because our wages and benefits have become more comparable," Riley wrote.

Riley wrote that the district has an annual audit performed and receives "the highest grade on our systems, internal controls and budgeting practices each year." He added that citizens are welcome to attend commission meetings and budget hearings.

On combining with another fire district, he said, “The discussion of consolidation is considered regularly. In order to make that happen, it would be up to the respective boards of fire commissioners and the voters. No, consolidation generally does not save money."

He said the district regularly applies for and receive grants. 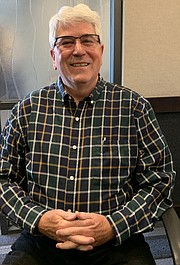