THE VETERANS' PRESS: Bagram Air Base, Afghanistan: A veterans story

Bradley Jordan, Spokane VFW 51 member, knows too well the stresses of serving our country in a hostile and dangerous location. Bagram Air Base was formerly the largest U.S. military base in Afghanistan.

Bradley was an Air Force Tech Sgt E-6 and security supervisor of a sector on the base. His pre-deployment training consisted of lectures by instructors who had never served in Afghanistan and who explained what they had heard from returning airmen. The information received was probably 50% accurate so his first few days behind the wire were crucial to his survival.

The Afghan military was deployed outside the base and the para-military forces and American military secured the inside perimeter. The “normal” for Bradley and his personnel was setting up security and being shot at or rocketed almost on a daily basis. They went from boredom to rocket attacks as sunset at 9 p.m. brought the enemy to life.

His shifts lasted 12 to 15 hours, but an attack would activate his sleeping team back on security detail. He will never forget Thanksgiving and Christmas when the base was under constant attack from small arms fire and rockets. Bradley assumes that the enemy was attempting to wear the Americans down and to lower morale.

A sewage stream ran right through the Air Base and Bradley could smell the ever-present odor of burning trash and burning rubber. Due to the many health hazards, no one was allowed near the stream. Children ages 6-18 were a persistent threat because they would dig tunnels, climb fences and cut wires to gain entry to the base. These children could not be engaged with lethal weapons so the team used paint-ball guns and sting-ball grenades to keep them at bay. The children would enter the base and steal anything they could get their hands on.

Outside the gates were many dangers because the Afghan Army, Afghan Police and the locals could not be trusted. Children wanted to hug the Americans and would reach into pockets and gear. Local people would appear to be your friend but might attack you later in the day. The use of retina scanners and finger printing databases were necessary to only allow prescreened locals on the base. Banks, markets, local gathering spots and residential areas were located around the base, therefore, any patrols through these areas were done with extreme caution.

Bradley and his team communicated with family back home as often as possible but they did not explain the constant dangers they faced. After returning home, Bradley struggled to communicate with his family. His mind in Afghanistan was on constant alert so it was a big challenge to adjust to life outside a war zone. Today he questions why our military stayed so long in Afghanistan. 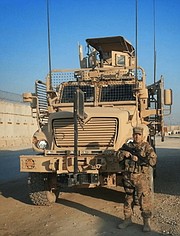