JEROME COUNTY — Idaho State Police have issued an AMBER Alert for a six-year-old boy in Jerome County who is believed to be in imminent danger.

The Jerome Police Department is looking for Kingston James Solis who was last seen at the 300 block of East Avenue 1 in Jerome.

Kingston is a six-year-old white boy with black hair and brown eyes. He is missing his two front teeth.

He was last seen wearing a gray hoodie, blue jeans and gray shoes. He had a black and red Avengers backpack.

The alert is reportedly activated for all of Idaho, as well as Malheur County, Ore., Lincoln County, Mont. and Spokane County.

Police said Kingston may be in the company of 40-year-old Lucy E. Mendoza.

Mendoza is white with black hair and brown eyes. She's about five feet tall and weighs about 130 pounds.

They may be traveling in a white 2018 Kia Stinger with Idaho plate ROXIEE.

The vehicle may be hanging out at locations with free WiFi. Mendoza is living out of her car, police said, and she uses apps on her phone to make calls.

If you have information on Kingston's whereabouts, contact the Jerome Police Department at 208-327-4328 or 911 immediately. 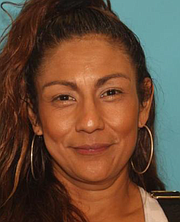