Phillips S. Baker, Jr. in his office at Hecla Mining Company in Coeur d'Alene, where he is president and chief executive officer.
BILL BULEY/Press

COEUR d’ALENE — As Phillips S. Baker Jr. sits in his office at Hecla Mining Company on Mineral Drive, he is relieved. He is also upset.

A three-year “bad actor” case against the president and CEO was recently dismissed. As far as Baker is concerned, it was overdue.

“It was really all politically motivated and I'm just kind of the guy standing in the middle,” he said.

“They took a statute and I understand the rationale for the statute, and I think it's appropriate, but they've taken it and misapplied it,” he said. “And they did it not for the good of the environment, not for the good of governance of businesses, but they did it for someone's political purpose, which is not what this country is about, right? At least it shouldn't be.“

Even with the case behind him, Baker said it never really will be.

“For my family and I, to have this characterization of ‘This guy's a bad actor,’ and you think about how people think about that term, bad actor, it's not a benign sort of thing. I mean, you’re a criminal, basically, and so they did this without ever even having a conversation with me. How inconceivable is that?”

Baker first heard about the “bad actor” case led by The Montana Department of Environmental Quality against him in 2018 via a press conference.

“So no due process whatsoever. No attempt to ask me, “OK, what role did you play?”

“When you work for a big public company, you're just one of a number of people that plays a role. And my role was pretty limited,” he said.

Baker was initially confident the case would be quickly dismissed.

“I thought, ‘OK, they don't have the facts. They never bothered to contact me.’ This will go away. In short order. And here we are. It took, what, three years to get here," he said.

How we got here

Baker has been at the helm of Hecla Mining Company, which operates mines in Idaho, Alaska and Quebec, since 2001. The company is the largest silver producer in the United States, producing 40% of all the silver that is mined in the U.S.

It was nearly a quarter-century ago when Baker became vice president of finance and chief financial officer of Pegasus Gold Inc.

He stayed four years. His replacement was named in January 1998.

From there, he joined Hecla.

Twenty years after Baker left Pegasus, the Montana Department of Environmental Quality sought to have him removed from two silver and copper mining projects Hecla proposed beneath the Cabinet Mountains near Libby and Noxon, the Associated Press reported.

Their argument was based on a state law that punishes companies and their executives who don’t clean up mining pollution — hence, "bad actor."

Pegasus Gold went bankrupt in 1998 before cleaning up pollution from three gold mines, including the Zortman-Landusky Mine near the Fort Belknap Indian Reservation, the AP reported.

The state and federal governments have spent more than $50 million in cleanup costs and water treatment will continue in perpetuity, officials have said.

Hecla has argued that its company was never involved with the Pegasus mines and that Baker left Pegasus before it forfeited its cleanup bond, which did not fully cover the costs, AP reported.

Baker's job with Pegasus “was to ensure that the bonds required by Montana DEQ were secured and placed with the State. He was not responsible for calculating the required surety amounts nor was he responsible for managing any reclamation work," according to information provided by Hecla.

At the time of Baker’s replacement as CFO in January 1998, Pegasus was “in full compliance with State bonding requirements."

In July of this year, Montana DEQ filed a motion to dismiss the legal case that sought to block Baker from being involved in proposed mines in northwestern Montana.

The filing drew criticism from environmental groups, but DEQ defended it.

“In our role as a state environmental agency, we have to make tough decisions in order to make the best use of state resources while also achieving our mission,” DEQ Director Chris Dorrington said in a statement reported by the AP.

DEQ’s decision to drop its case “came as little surprise to opponents and supporters of the Rock Creek and Montanore projects following the election of Gov. Greg Gianforte,” reported the Montana Free Press. “Last year, Gianforte spoke favorably of the two projects in Lincoln and Sanders counties and held a campaign event at Hecla’s offices in Libby. In its motion to dismiss, attorneys representing DEQ said Gianforte’s election and the appointment of a new director prompted the agency to reevaluate the case, which was originally filed during the (Steve) Bullock administration.”

Montana DEQ noted the mining projects at issue in the case — the Troy Mine Project, the Montanore Mine Project and the Rock Creek Mine Project — are all in compliance with the Metal Mine Reclamation Act.

Baker called it an “interesting situation in Montana, where you've got the local people that absolutely want these projects to go forward. And then you've got basically, political people and people that are outside the state of Montana that are using this really as a pawn for whatever purposes they have. Because environmentally, there's not going to be an issue with these projects. And so it's just more of this, a bit of smoke and mirrors where they use these things to advance their political purposes without really being concerned with the people that are really affected by it.”

Baker, while glad the case is finally over, said it should have never gotten where it did and now, the damage can't be undone.

“You Google my name and you're going to come up with ‘bad actor’ associated with my name forever. Forever," he repeats. "So it's less than satisfactory, but at least it's happened and it's the right thing to happen and we'll move on from it.”

Baker called it an “unfair characterization” that could have cost his job with Hecla, but the board believed in him.

“I’ve been with the company for 20 years. We’re talking about an event that happened 25 years ago, so they were very supportive. They could have taken action and said, ‘We’re going to fire you over over this.' But they didn't. They stood with me."

He said Hecla will "take these projects in Montana forward and other potential things in Montana.”

Baker noted that silver is important for the transformation to renewable energy, electric vehicles and 5G.

“Hecla has probably never been in as good of a position as we're in today,” he said.

Baker wrapped up his Press interview with a statement:

“The importance of government organizations to be very cautious about using the power they have to make a judgment about people — once they do it they can never completely take it away.” 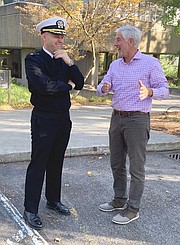