Back from the ashes

The commercial spaces are leased on the main floor of the building being constructed (replacing the one that burned) at Fourth and Lakeside.

The occupants will be an engineering company, an organic, skincare, massage and med space and a fast-food casual restaurant with outside seating.

The second floor will have eight apartments with a mix of studio, one-bedroom and two-bedroom spaces. Anyone interested can connect with DLRproperties.net as they get closer to completion in early 2022.

A new office for Allergy Free Air is open in Suite 500 of the 500 N. Government Way complex near downtown.

"Our product takes all the allergens and pollution from the home and filters it through a gallon of water to provide a healthier lifestyle," Escritt said.

With many beverage and fresh baked items, Roasted Coffee Co. has opened in a former cupcake location at 233c W. Dalton Ave. (at Government Way).

With one 800-square-foot space remaining, four businesses are planned for the Lucille building under construction at 2605 N. Fourth St., just north of Verizon. 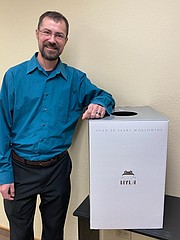