Photo courtesy GONZAGA ATHLETICS Gonzaga freshman Chet Holmgren prepares to drive to the basket against Eastern Oregon on Sunday at the McCarthey Athletic Center in Spokane.

McCullough, who had just made a running bank shot for his only two points of the game, hobbled off the court favoring his right knee, and did not return to the exhibition game, won easily by the Zags as expected, 115-62.

McCullough told The Press he will get an MRI this week.

Julian Strawther, in his first career start for the Zags, scored a game-high 18 points and grabbed a game-high nine rebounds. He was 3 for 6 from behind the arc.

Freshman Chet Holmgren added 17 points on 5 of 6 shooting from the field. Another frosh, Kaden Perry, had 12 points, Drew Timme chipped in 10 points and three blocks, and Andrew Nembhard and Hunter Sallis both scored 11 points. Nembhard led all players with four steals. Nolan Hickman dished out a team-best four assists.

Playing in front of a sold-out crowd for the first time since the 2019-20 season, the Zags (0-0) never trailed and led by as many as 55 points late in the second half. GU forced 25 turnovers and turned that into a 38-3 advantage in points off turnovers. The Bulldogs also held a 70-22 advantage in points in the paint.

Gonzaga jumped out to 14-5 lead after the first five minutes, before leading by as many as 28 points in the first half, including a 55-27 halftime lead.

The Bulldogs’ 16 steals led to a 46-7 advantage in fast break points. GU also had 11 blocked shots. The Zags limited EOU (2-1) to 30 percent shooting from the field, while making 53.8 percent from the field. 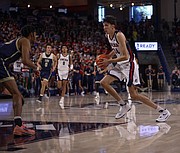 Photo courtesy GONZAGA ATHLETICS Gonzaga freshman Chet Holmgren prepares to drive to the basket against Eastern Oregon on Sunday at the McCarthey Athletic Center in Spokane.