“I do not like petty politics. I do not like political stunts over the rule of law,” A news release from Little’s office said Friday. “However, the significant consequences of the Lt. Governor’s flimsy executive order require me to clean up a mess.”

A legal opinion by Chief Deputy Attorney General Brian Kane supported the governor’s statements of McGeachin’s order, stating Friday that the lieutenant governor exceeded her authority in a move that was likely illegal and unconstitutional.

Former Idaho Lt. Gov. Jack Riggs, who held the office from 2001 to 2003 after serving as a North Idaho senator, shared Little’s criticism of McGeachin’s actions.

“I do think this was a political stunt,” Riggs told The Press. “She knew the moment the governor came back he would rescind what she did. I’m embarrassed for the office of the lieutenant governor.”

In his time as Idaho’s second in command, Riggs said he frequently stepped in when then-governor Dirk Kempthorne was temporarily unavailable — as is advised by Idaho statute. Never, he stated, would he have considered acting like McGeachin.

“It’s not good when our highest elected officials can’t trust each other. I just hope voters pay attention to who is doing what,” Riggs said. “I would hate to see the politics of Idaho destroy Idaho.”

North Idaho local and candidate for the lieutenant governor seat Luke Malek told The Press that the order was merely “political theater meant to score political points.” In his tour around the state, he pointed out that very few places in Idaho require masks.

“This was meant to get headlines only,” Malek said. “I think it harms the public perception of the political process, and I don’t think it has anything to do with how Idaho conducts policy. It was just a cheap stunt.”

Little opposed issuing state orders on mask mandates throughout the pandemic, maintaining the premise that local and regional governing bodies should implement those requirements on constituents if they deemed it was warranted.

“Just like the states begrudge federal government mandates, local governments in Idaho resent the state doing the same thing,” A Friday release from Little’s office said. “The executive order unilaterally and unlawfully takes away authorities given to the state’s mayors, local school board trustees, and others.”

In Kootenai County, a series of mask mandates were put in place by the Panhandle Health District, the city of Coeur d’Alene, and various schools — most of which are now lifted.

Without advance notice of an impending executive over, Coeur d’Alene School District spokesman Scott Maben said the district had not prepared to alter operations. Friday morning, in an address to Lake City High School families and students, Maben said the mask requirement was not being enforced.

“Masks are still strongly recommended, especially in light of the recent outbreak of COVID-19 cases among students at Lake City,” he wrote. “We also encourage our seniors, who are preparing for graduation, to be particularly cautious at this time, as exposures without masks can result in quarantine.” 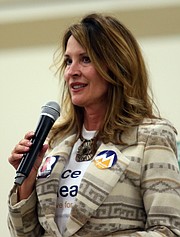