New group gangs up on growth

Neither rain nor sleet could keep contractors from continuing their work on the Rathdrum Prairie Monday. The Prairie is ground zero for new development in Kootenai County, one of the many topics facing planners and elected officials in a new collaboration. (CRAIG NORTHRUP/Press)

Mid-day traffic begins to back up southbound along Highway 95 in Coeur d'Alene Monday. The swell of new residents coming in from urban centers has created a logjam of drivers locally. (CRAIG NORTHRUP/Press)

Government leaders have come together in the early stages of a new coalition aiming to tackle the all-encompassing albatross of growth.

Kiki Miller, councilwoman for the city of Coeur d’Alene, said the genesis of the group emerged over the summer of 2020, when local leaders noticed a surge in population as a result of the coronavirus.

“It’s been conversations that have really been going on for months,” Miller said. “It started, really, with the pandemic. All of the sudden, people were moving here. We’re all working on our [comprehensive] plans, and we’re watching the housing market just skyrocket within one year. We had to ask ourselves how this new wrinkle will affect our comp plans.”

Those numbers have been accentuated by people seeking political refuge from urban centers in populated states like California for rural, conservative areas like North Idaho.

In the midst of a continuing population spike, California ended up losing more than 200,000 residents last year alone, according to real estate surveyors in the Golden State. Many of those residents fled here.

At the same time, the Federal Housing Finance Agency reported that Idaho topped the country in annual appreciation of homes in the first half of 2020, a 10.8 percent rise from 2019 and almost two full points ahead of the pace of second-place Arizona.

“This obviously affects our comp plans,” Miller said. “We look at projections 20 years out, and this increase means those projections are already outdated.”

But as residents are quickly realizing, growth is not merely the simple addition of people moving to the area and the ensuing traffic jams they create. Growth permeates almost every facet of life in Kootenai County, from how people park their cars to how boaters pay their dock fees to how schools fill their classrooms.

Miller said the problems associated with growth are endlessly complex, requiring a joint effort to unpack the issues residents face.

“We need to work on this as a region,” Miller said. “Each city has a different set of comp plans, and a different set of issues. The county has its own plan. We have to communicate with one another if we’re going to get in front of some of these challenges.”

“It’s probably a good idea for people to work together on this,” Fillios said Monday. “The cities, they produce their own land use comprehensive plans. We all basically operate independently of one another. Coming together is something that would probably benefit all of us.”

Local planners met for their first formal meeting last Wednesday. That meeting, comprised exclusively of planners, came together to narrow down goals and formulate a strategy for expanding its reach.

The next meeting will include some elected leaders. Eventually, the group’s radius will expand, Miller said, to include community groups, trade associations and other interests.

But Miller stressed that locals relying on this new group to solve the growth problems facing Kootenai County will only lead to disappointment. This group is focused more on education and a gathering of resources.

“It’s really more about educating the public on how they can become more involved,” she said. “What things can be changed, and at what level? It’s educating in the sense that, ‘Here are the steps that need to be taken to accomplish this goal, and here are the resources available.’”

Legal departments have been involved in the informal conversations, as well, to advise how to change a city or county code, if that’s the direction residents want to go.

“This group’s goal is to have the experts and planners come together with resources,” Miller said. “These are people on state boards that can give accurate information on what’s legal and what processes they have to go through if something has to happen. This way, the community has a resource to vet out, and it has options to get the communities more involved.”

Among the next steps is to put together a list of frequently asked questions the county and cities could potentially post, informing their populations about policies and procedures, so they may make informed decisions going forward. It’s a path Miller said she thinks will long outlive the COVID-19 pandemic that accelerated the explosion of the area’s already booming growth.

“I don’t see the growth issue changing dramatically after COVID,” she said. “People are always going to want to live in a place as desirable as North Idaho. Having planners and experts weigh in on what that looks like can really help us going forward.” 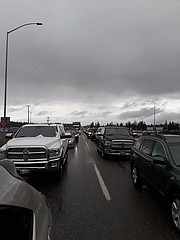 Mid-day traffic begins to back up southbound along Highway 95 in Coeur d'Alene Monday. The swell of new residents coming in from urban centers has created a logjam of drivers locally. (CRAIG NORTHRUP/Press)