Reaching the finish line together

COEUR d’ALENE — After Sonja Enger completed the 5K ISP Foot Pursuit on Saturday at McEuen Park, she was in good spirits.

“I’m getting better at it,” she said.

But Enger was even happier for her daughter, Anette, and those who helped her reach the finish line.

“She gets to participate and do something she would never be able to do on her own,” Enger said. “Some of these great volunteers are super fast, so she gets to have the wind flowing through hair, she gets to be part of a team. These people are so amazing to her. They’re like family.”

Anette Enger is a Team Hoyt Coeur d’Alene member. Sitting in her racing wheelchair, she was pushed through the course by volunteer Bryan Langford. They finished strong and happy, greeted by cheers.

Which made Sonja Enger’s day.

“Does my heart good as a mom because people watch their kids do all these sports and activities, and that’s not what you get to do when you have a kid with disabilities,” she said. “So, it’s pretty cool to belong to something.”

And what about Anette?

“She loves her friends here. She really loves going fast,” her mom said. “She loves being part of this group. They’re her people.”

Team Hoyt Coeur d’Alene had four teams entered in the fun run that was a benefit for North Idaho CASA.

It is one of about 10 chapters in the country that belong to the nonprofit Team Hoyt, which promotes “inclusion for everyone. No matter your disability, no matter your age, we're here to get out and enjoy beautiful North Idaho! We welcome all to join, together, we're amazing!

It is named in honor of father Dick Hoyt and son Rick Hoyt. In 1962, during childbirth, Rick’s umbilical cord was wrapped around his neck, cutting off the supply of oxygen to his brain. He was diagnosed as a spastic quadriplegic with cerebral palsy,

Doctors advised Dick and wife Judy to institutionalize Rick. They refused and brought Rick home, to raise him like any other child.

Dick had even bigger plans to show what his son could do.

He began pushing, pulling and even carrying his son through races. They becoming known as “Team Hoyt,” received national attention, and finished hundreds of triathlons, including several Ironman and marathons,

The Hoyt Foundation, Inc. was formed in 1989 “to aspire and build individual character, self-confidence and self-esteem of disabled young people of America through inclusion in all facets of daily life; such as family and community activities, especially sports, at home, in the workplace and in schools.”

She pointed out that special needs athlete Ron Hebert was at the finish line cheering for those still coming in.

“Out on the course, every time somebody goes by, he’s yelling at them,” she said.

They run, bike, swim in several summer races and come fall and winter, turn to bowling and pizza.

She said they can use more volunteers and special needs athletes. With more people moving to the area, she wants to spread the word about Team Hoyt Coeur d’Alene.

“That’s been our biggest challenge, getting our name out,” she said.

Mark Evans of Coeur d’Alene pushed Anthony Eastman through the course that passed in front of The Coeur d’Alene Resort and through City Park. They finished strong, holding off another runner charging hard.

“These guys are really competitive,” he said.

He noted that Ron Hebert dropped 60 pounds because he wanted to go faster.

“It’s that important to him to change his diet,” Evans said.

Evans has been involved since Team Hoyt Coeur d’Alene was formed in 2016.

It’s been more than he expected.

“I had no idea what I was getting into,” he said. “I got a lot out of it. It’s a chance to give back to somebody. You see how they want to win, just like everybody else. It’s that much more joy."

A beaming Ron Hebert, in his chair, smiled when asked about his race, pushed by Steven Tyson. They won.

As Akins pointed out, Team Hoyt members love to meet people. At the end of a conversation, Hebert said, “I’ll see you again, OK?”

The longtime triathlete said when he inquired about volunteering with Team Hoyt, he didn't wait long for an answer. The response was, “Do you want to race this weekend?”

Being part of Team Hoyt, being a co-pilot, has been “a whole other level" of sports and friendships.

“You both experience it together. They help you and you help them," Tyson said. "It’s awesome.” 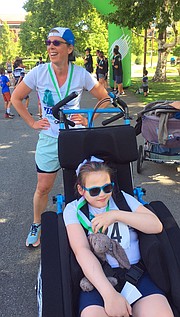 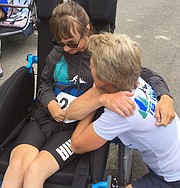