Phil McGrane chats with a crowd Tuesday at Bakery by the Lake in downtown Coeur d'Alene.
Courtesy photo

COEUR d’ALENE — Phil McGrane wants to be the next Idaho Secretary of State.

As Ada County Clerk, McGrane understands the importance of the person who oversees elections.

“How many of us knew Georgia had a secretary of state a year ago?” he asked rhetorically, answering that by saying “an exclamation point was put on the importance of the position” by what happened in Georgia after Donald Trump lost the key state amid unproven claims of widespread voter fraud.

Not that Idaho was embroiled in any such controversies.

He said that in his investigation, some fraud is detectable, but nothing that would affect the election results.

"There are a lot of safeguards in place that many people don’t know exist,” he said.

He also said that "bad actors" aren't necessarily to blame when things run afoul in elections.

"One of the biggest vulnerabilities … is the competence of the people running the elections," he said.

McGrane gained some fame last year when, in the midst of the pandemic, he rallied county clerks statewide to lobby for a special legislative session. As a result of that session, legislation was passed to help “Idaho pull off an unprecedented election we can all be proud of,” he said.

McGrane, 40, has been visiting with North Idahoans this week in an early launch to his campaign. It's his first official foray on a campaign trail that might not end until November 2022.

So far on the Republican side of the ledger, McGrane, Sen. Mary Souza of Coeur d’Alene and current Deputy Secretary of State Chad Houck have declared their candidacies.

“I’m a self-described elections junkie," McGrane said, noting that his passion for elections began in 2005 counting punch cards and recruiting poll workers. “Since then I have gone on to serve as a law clerk to the United States Elections Assistance Commission and have been involved in every aspect of running elections in Ada County.”

A fourth-generation Idahoan with a law degree from Denver University, McGrane wants to ensure that Idaho’s election laws are followed and, perhaps in the near future, strengthened. One area of focus is campaign finance law.

“We need to make it simpler to follow and comply with those laws,” he said.

To that end, McGrane was involved in a joint legislative interim committee on campaign finance reform that helped develop a centralized database. Information from all candidates who raise or spend more than $500 will be available for anybody to examine.

Regan is chairman of the Kootenai County Republican Central Committee and president of the Idaho Freedom Foundation Board of Directors.

Under McGrane’s leadership, the Ada County Clerk’s Office, with 198 employees, has been named one of the 10 Best Places to Work in Idaho all three years he’s been in charge. It is the only governmental office in the state to be so honored.

McGrane and his wife, Angella, have three children and reside in Hidden Springs, outside Boise. 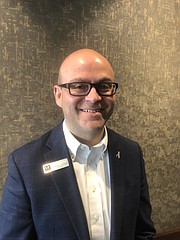