Duff Angle: Not your average gardener

Duff Angle, a construction worker picked up gardening three years ago; being colorblind hasn't kept him from creating eye-catching displays of beautifully shaded blooms; tending his garden daily, he spends about 12 hours on it every week
ELLI GOLDMAN HILBERT/Press

Beautiful blossoms stretch across the front of Duff Angle's yard, everywhere you look, there's a feast for the eyes

Duff and Bonny Angle stand in front of the voluminous blossoms adorning their home - "Last year the hanging baskets grew all the way to the ground," Bonny said.

COEUR d’ALENE — Duff Angle happens to be colorblind. But that hasn’t impeded him from creating a rainbow-colored garden in front of the Coeur d’Alene home he shares with his wife, Bonny.

Angle, 51, picked up the hobby just three years ago. Standing in front of his voluminous baskets, dripping with multi-colored blossoms, it’s clear that the act of growing beautiful things has, well, grown on him.

“I don’t know (why I picked up gardening,)” said the construction worker. “But I really enjoy it. I enjoy buying (the flowers) just as much as I enjoy working with them.”

Angle spends about 12 hours weekly tending to his burgeoning garden. The latest blooms from VanHoff’s Garden Center, his favorite nursery, rested in pots while Angle searched for a place to plant them.

Angle’s color-blindness means the flowers don’t occur to him as differing widely in color from one another.

“I’ve learned what some colors are but they are mostly different shades of black,” Angle said. “I probably don’t see the vibrance. This is one of the most vibrant colors I see; it’s yellow.”

Looking at the rainbow of blooms in blues, violets, pinks, oranges and yellows, it's hard to believe Angle sees only shades of gray.

“I just put stuff together that I like,” he said, pointing to his purple dinner plate dahlias. “I use a little bit of everything.”

Angle's color-blindness doesn’t greatly affect him, though he recalls being teased as a child. The condition was discovered in second grade during a test when he realized certain items on the page weren't visible to him because of the colors they were printed in.

“Sometimes he wants to put a strange outfit together,” Bonny admitted.

“Yeah, Bonnie has to dress me once in a while,” Angle said.

Duff and Bonny Angle stand in front of the voluminous blossoms adorning their home - "Last year the hanging baskets grew all the way to the ground," Bonny said. 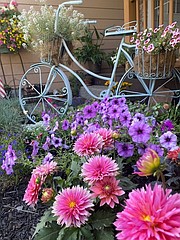 Beautiful blossoms stretch across the front of Duff Angle's yard, everywhere you look, there's a feast for the eyes