Kaci Thomas is draped in a lesbian flag and Craig Thom holds a sign that reads 'Love is Love.'

Activists show their support for the rally on corner of Sherman Ave.

From left, Angie Rios, Andrea Newsom, Koda Martin and Alix Taylor she their support with an intersectional LGBTQ+ flag and rainbow masks.

“LGBTQ+ friendly” isn’t the first phrase that comes to mind when you think of Coeur d’Alene, but local youth from Lake City High School are actively working to change that.

On Jan. 16, around 100 socially distanced people gathered at the Rotary Lakeside Bandshell in Coeur d’Alene City Park to support LGBTQ+ Youth at a rally organized by Erin Olson, Evangeline Wilder and Mike Thurston, to promote a culture of safety for students and youth in North Idaho and beyond. The event followed the “Stop the Child Abuse” rally held the previous Monday which addressed a situation at Northwest Expedition Academy involving a school counselor and a student wanting to talk about transitioning and the parent’s rights to communications. Idaho Code 33-1212 does not require school counselors to report back to parents.

The situation has gained attention on social media across the country and students have come together to fight for their rights. When a Massachusetts nonprofit called MassResistance got involved and began calling for the counselor in question to be fired as well as working on legislation to ban counselors from withholding information from parents, the students responded with their own voices.

“Students should feel safe from discrimination in every school,” Erin Olson, LGBTQ+ Rally Organizer, told the audience when she took the stage as the event’s headliner on Saturday. “They should also see themselves represented in their school programs and to live without fear of persecution.”

Olson, a freshman at Wellesley College, left Lake City High School a year early to move 2,OOO miles away due to experiencing homophobia growing up in North Idaho.

“I normalized hiding away the gay parts of myself,” Olson explained, “because my friends and family would reject me, because I could be fired from my job for it up until this summer, because complete strangers would say horrible things about my identity. Everyone deserves to live in a safe space without fearing harassment or discrimination for who they are.

“Families, counseling services, and public schools should always prioritize a child’s fear that they won’t be loved or accepted above anyone’s fear of those different from them.”

Speakers Evangeline Wilder and Mike Thurston took the podium to share their voice in support of trans youth.

“Being trans is not only a blessing for trans people; we are a blessing for the world,” Evangeline said with emotion. “We are examples of what is possible when one refuses to be bound by expectation and convention. Every breath trans people take in the gender we have chosen is a triumph of soul over body. We offer glimpses into a world in which all of us—not just trans people—are fully free. A world in which everyone creates themselves exactly how they want to be. The hallmarks of contemporary trans experience, hormones and name changes and pronoun shifts, all that—they are promises of a better future. For us and for you.”

Trans and gender-non-conforming discrimination disproportionately leads to violent crimes in comparison to other LGBTQ+ individuals. National statistics through July 2O2O show the number of transgender individuals suspected of being murdered surpassed the total for all of 2O19. The statistic particularly affects Black and Latinx women.

Mike Thurston stepped forward addressing students in the crowd directly. “Look around at the people here fighting for a future where meetings like these are no longer necessary. What we all want more than anything is to tell every student that they are safe, supported, and celebrated, for they are.”

Each of the speakers defended the rights of LGBTQ+ students and youth to have the protection to share their story in their own time, when they are ready and to feel in a safe and supportive environment to do so.

“It isn’t enough to not be hateful. We need to actively nourish and support queer youth,” Olson said. “Homophobia is fear. Fear only breeds fear and hatred. We need school environments, counseling, and organizations that support an inclusive and loving community climate. Our city of Coeur d’Alene has already passed an ordinance prohibiting discrimination based on gender identity and sexual orientation, but those protections need to be extended to the state of Idaho as a whole.”

Olson urged the citizens of Coeur d’Alene to take action.

“Students should feel safe from discrimination in any school, public, private, or charter, in our community, and we owe it to our youth to fight for that. To fight for safety to be themselves and to be loved and celebrated for who they are. To see themselves represented in their school curriculum, to develop community in GSAs with other students like them, to have adequate mental health resources in their schools, and to live without fear of persecution based on their identity.”

As Erin Olson emphasized in her speech, “Everyone deserves to live in a safe space without fearing harassment or discrimination for who they are.”

On March 9, the school district is voting for a levy that would further financial resources for mental health in schools.

“Voter registration is due February 12th,” Olson reminded the audience. “Be sure to show up for our kids in the voting booth as well. Our children deserve the best, and we must be loud, proud, and deeply supportive of them.” 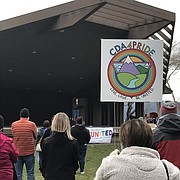 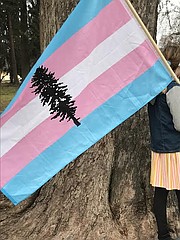 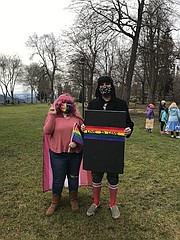 Kaci Thomas is draped in a lesbian flag and Craig Thom holds a sign that reads 'Love is Love.' 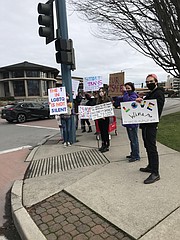 Activists show their support for the rally on corner of Sherman Ave.

From left, Angie Rios, Andrea Newsom, Koda Martin and Alix Taylor she their support with an intersectional LGBTQ+ flag and rainbow masks. 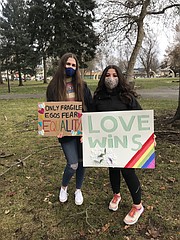 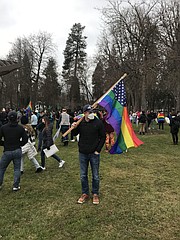 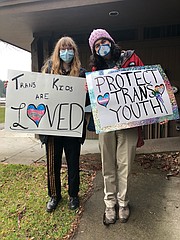