Kootenai Health board stands by appointments

A Republican official said he was stunned by the Kootenai Health Board Of Trustees’ vote Tuesday to change bylaws that would extend two appointed terms before re-appointing those seats’ trustees, all with six weeks to go before Election Day.

“I think the timing speaks for itself,” Handeen told The Press on Wednesday. “I think everybody can draw their own conclusions. It’s hard to believe it doesn’t have anything to do with the timing of the election and fears outsiders would bring to the board.”

Jim Adamson, general counsel for Kootenai Health, said the issue of potentially extending appointed terms has been on the board’s table since January.

“The tradition had been for two-year appointments, but the board realized that appointment term was not long enough for a trustee to be most effective,” Adamson said. “As a result, a bylaw amendment was presented in March to change the appointed trustee term to six years. Consideration of the amendment was continued to the April meeting so additional detail could be provided about staggering the terms of appointed trustees, in the same way the terms of elected trustees are staggered.”

Promptly after that vote, the board re-appointed Dave Bobbitt for the five-year term and Robert Colvin for the four-year term.

“The existing appointed trustees were reappointed, as their presence on the board has proven valuable,” Adamson said.

But Handeen said the extension of those terms and the re-appointments so close to Election Day raises red flags about the integrity of the board that shapes the direction and strategic planning of Kootenai Health, the largest employer in the area.

He added that, should voters choose to unseat incumbents and bring fresh perspectives to Kootenai Health’s Board of Trustees, the outcome of the re-appointment vote might have been vastly different.

“Each (challenger) has their own area of expertise,” Handeen said. “Steve Matheson, for example, is a good watchdog and is not going to be a rubber stamp.”

Handeen shared his views on Facebook, where it promptly accumulated looks and shares.

“It got shared a lot more than I thought it would be,” he said. “It’s just my personal Facebook page. I forget sometimes about the viral nature of social media.”

Adamson insisted, however, that the board’s decisions Tuesday were on the up-and-up. 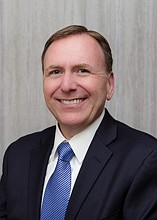