Mary Robinette isn't one to draw attention to herself.

But during Monday's fourth annual North Idaho Philanthropy Day Celebration, her selflessness was recognized statewide as she received both the Cecil B. Andrus Volunteer of the Year award and the Outstanding Adult Volunteer — Brightest Star award.

Robinette, 64, has volunteered with Family Promise of North Idaho for almost eight years, drawn to the organization after hearing a sermon about making homeless families feel welcome. After the sermon, which was held in the same church as Family Promise — St. Luke's Episcopal Church on Wallace Avenue — Robinette said she felt so touched that she immediately went and asked how she could help.

"Making a homeless family welcome and making them feel dignified on their worst day ever really resonated with me," Robinette said.

Learning about the homeless was new to her. While she was skilled in office responsibilities and an organization's operations, understanding how to care for those without a home was entirely different. To help in her own way, Robinette has volunteered every Wednesday to handwrite thank you notes on branded cards she created and printed, organize Family Promise's list of supporters, track donations and call logs.

Robinette said one of her fondest memories was a single dad with a 2-year-old son dressed as a pair of cowboys.

"They wore the hats and the boots and everything," she said with a laugh. "Watching him evolve through this program, from getting his GED to trying to care for his son, was particularly moving. There are four GED tests, and he would come in after every one, and we'd celebrate."

The man later went on to college and returned to Family Promise, now as an active board member.

It was one of the many touching stories Robinette sees through the organization, which guides homeless individuals by developing action plans that address housing, education, employment, and financial instabilities.

"I've seen these transformations on the faces of our guests," she said. "The transition is obvious, and that transformation is very rewarding. We've had pregnant women with whom we've rejoiced and help figure out what to do after the baby. It's a different kind of caring."

This is the first time Family Promise has ever submitted a nomination for the award, executive director Cindy Wood said. Staff and the organization board chose to nominate Robinette because she strives to help the homeless and improve Family Promise operations, Wood said.

"She helps us help families," Wood said. "She does not seek recognition, and I am excited to tell the rest of the state about her wonderful giving spirit."

Because of Robinette's compassionate phone training, Family Promise has been recognized and funded as a resource center in the community, Wood said. Also, supplying all the homeless shelter guests with brand new pillows, organizing meal services, sponsoring events, and paying for postage made Robinette an obvious choice for the award.

The three regional Gov. Cecil D. Andrus Volunteer of the Year awards were announced live at each celebration, as a surprise to the winners and their communities. Out of all other North Idaho applicants, Robinette was selected for going above and beyond.

The award ceremony was online Monday morning and recognized along fellow North Idahoans for their philanthropic service and volunteering.

"I'm honored and pleased, but I just like to do the work," Robinette said. "I'm extremely thankful for the opportunity to practice my faith and make my itty bitty bit of difference in the community."

Winners of the Idaho Philanthropy Day awards were chosen by a committee that studied each nomination based on philanthropic spirit, including time, talent, treasure, and community involvement.

"We were overwhelmed again this year with a record number of nominations," said Amy Little, CEO of the Idaho Nonprofit Center. "Our committee and judging teams had an incredibly difficult challenge in narrowing down our honorees. Truly, there are stories of heroes in every corner of Idaho." 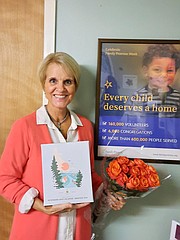