Veteran takes you back with THE OLD GUARD

The Old Guard dates back to our nation’s earliest days and continues to perform a multitude of duties, including some for ceremonial occasions and of course, standing vigil 24/7 at The Tomb of the Unknown Soldier in Arlington National Cemetery.
LEN CROSBY/Special to The Press

My wife and I took our grandkids to Washington, D.C., last summer for their first visit to our nation’s capital. One of the spots we visited was Arlington National Cemetery, where their great-grandfather is buried, having qualified for Arlington by virtue of serving 32 years in the Army and receiving the Silver Star.

We toured the grounds and were privileged to observe the Changing of the Guard Ceremony at the Tomb of the Unknown Soldier. The Guard is changed every half hour and the guardians are all members of the 3rd Infantry Regiment, which is the oldest active duty infantry regiment in the United States Army, hence its nickname, “The Old Guard.”

The Regiment was actively involved in the Mexican War in 1847 and participated in all of the battles commanded by Gen. Winfield Scott, who gave the regiment its nickname, commanding the Regiment to lead the Army’s victory march into Mexico City and telling the rest of the units to “take your hats off to the Old Guard of the Army.”

The Regiment is the only unit in the United States Armed Forces authorized to march with fixed bayonets in all military ceremonies and parades in honor of the 1847 bayonet charge that the Regiment made during the Battle of Cerro Gordo, which won that battle. The charge was led by Captain Robert E. Lee, who was a staff officer for General Scott.

The Regiment served as an active infantry unit throughout the Civil War, and was involved in most of that war’s major battles: Bull Run, the Peninsula Campaign, Antietam, Fredericksburg, Chancellorsville, Gettysburg and the surrender at Appomattox. The unit also actively participated in the Indian Wars in the western United States, the Spanish American War and the Philippine Insurrection.

In 1948, The Old Guard was designated as the Army’s official ceremonial unit and the official Escort of the President. Two battalions of the 3rd Infantry Regiment have performed these duties consistently since then. The mission of The Old Guard includes both memorial duties and ceremonial duties.

Special events include the Twilight Tattoo, a weekly performance in the adjacent Washington area on Wednesday evenings from May to July, and the Spirit of America, a historical pageant presented at three national venues in September.

In addition to the marching platoons, there are also elements of The Old Guard that serve special roles unique both to the regiment as well as the US Army. Among these are the sentinels of the Tomb of the Unknown Soldier, maintaining a 24-hour watch over one of the nation’s most sacred sites; the Continental Color Guard, which presents the nation’s colors at special events; the Presidential Salute Battery, which renders honors to senior dignitaries at arrival and wreath ceremonies, reviews, and full honors funerals; and the U.S. Army Caisson Platoon, which provides horses and riders to pull the caisson (the wagon that bears a casket) in military and state funerals.

The Caisson Platoon also provides the riderless horses used in full honors funerals and supports wounded warriors participating in the Therapeutic Riding Program. Other elements of The Old Guard include the Commander-in-Chief’s Guard (Company A), replicating the personal guard of General George Washington; wearing Colonial blue uniforms, powdered wigs, and cocked hats; and bearing Brown Bess muskets and halberds at ceremonies and special events; the U.S. Army Drill Team, which demonstrates its skill and precision around the nation, and Old Guard Fife and Drum Corps, which plays traditional arrangements of marching music, dating back to the time of the Continental Army.

The Old Guard Fife and Drum Corps marches in Colonial style red coated uniforms — to be “better seen through the smoke of battle”; the uniforms also include cocked hats and white powdered wigs. The drum major of the Fife and Drum Corps traditionally bears an Espontoon (an historic pike-like weapon) in his right hand to direct and command his unit. As such, he is the only soldier in all the U.S. Armed Forces authorized to bear an Espontoon and to salute with the left hand (although U.S. Navy personnel are allowed to salute with the left hand under certain conditions).

The Old Guard performs its duties on a zero-defect, no-fail basis. Performing more than 20 military honor funerals per day at Arlington, and manning the post at the Tomb of the Unknown Soldier on a 24/7 basis with no exception for weather, Old Guard soldiers are held to the highest standards of perfection.

During the Vietnam War and the surge in Iraq, Old Guard soldiers provided escort services for fallen military members arriving back to the United States aboard military planes on an almost daily basis, no matter the time of arrival or the conditions of the weather.

As quoted by Sen. Tom Cotton in his recent book, Sacred Duty: A Soldier’s Tour at Arlington National Cemetery:

“No one summed up better what The Old Guard of Arlington means for our nation than Command Sergeant Major of the Army Dan Dailey. He was taking a foreign military leader through Arlington to lay a wreath at the Tomb of the Unknown Soldier. Sergeant Major Dailey said, ‘I was explaining what The Old Guard does and he was looking out the window at all those headstones.’ He said, ‘Now I know why your soldiers fight so hard for your country. You take better care of your dead than we do of our living.’”

Len Crosby of Post Falls is active in many veteran causes and organizations. Len received two Purple Hearts and a Silver Star while on duty in the Vietnam War. 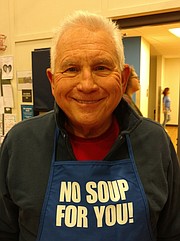