Honor your flag and its history

Flag Day is celebrated in the United States on June 14 every year. At the seasonal Middlebrook (New Jersey) encampment of the Continental Army during the Revolutionary War, on June 14, our new flag was hoisted in 1777, which became the tradition of flag day. By resolution passed on that date in 1777, the Second Continental Congress commemorated the adoption of the flag of the United States. President Woodrow Wilson (1856-1924), our 28th president in case you missed it in history class, issued a proclamation in 1916 that officially established June 14 as Flag Day. Though not an official holiday, National Flag Day was established by Act of Congress in 1949.

Commonly known as the “American” flag, it is also referred to as “The Stars and Stripes,” “Old Glory,” and, of course, the “Star-Spangled Banner.” Alternating with seven red and six white, the stripes represent the original 13 colonies that declared independence from the Kingdom of Great Britain. The blue rectangle with white stars represents our 50 states. The colors of the flag are specific. “Old Glory Red” signifies hardiness and valor. “White” signifies purity and innocence. “Old Glory Blue” signifies vigilance, perseverance, and justice. The Color Association of the United States (CAUS) specifies the exact colors for our flag. The American national flag and many state flags are officially based on the 1981 edition of the Standard Color Reference of America.

More than just a symbol of America, to veterans, it has a whole other meaning. To start our day, we stand at attention and salute as our flag is rapidly raised to the roar of a cannon and a bugler playing reveille. The bugler sounding retreat and the roar of the cannon end our day with us standing at attention and proudly rendering a salute as our flag is slowly and purposely lowered. Our pride and commitment to America are enhanced by knowing that our flag represents freedom and democracy during each of these ritualistic ceremonies. The American flag has become a widely recognized symbol of the United States and is in the hearts of Americans who have fought and died for it.

Over the years, the flag was a military ensign flown from forts marking American territory, or from ships identifying them as American. December of 1860 changed the meaning of the American flag. On Dec. 20, South Carolina declared its secession from the United States. It was the first state to do so. Six days later, U.S. Army Maj. Robert Anderson, without orders and on his initiative, abandoned his indefensible garrison at Fort Moultrie in Charleston Harbor and moved his men and smaller cannons to Fort Sumter, where he raised the American flag. Fort Sumter, named after the Revolutionary War hero Gen. Thomas Sumter, was built after the War of 1812. Are you taking notes? There will be a test later. It was one of the fortifications on the southern U.S. coast to protect our harbors. On April 12, 1861, Confederate cannons opened fire on Fort Sumter after Anderson refused to surrender. These were the first shots of the Civil War. During the siege, the flag fell, and Lt. Norman J. Hall risked life and limb to raise it. His eyebrows were permanently burned off. The next day Maj. Anderson surrendered and evacuated the fort. He returned north with the Fort Sumter flag, where it became a recognized symbol of the United States and is displayed in the fort’s museum.

Gracing the skyline, Old Glory is a welcome sight for those on deployments, especially in combat. Coming in from a security patrol around an isolated firebase, from a road march with armored vehicles, or escorting dignitaries to an Embassy, seeing the flag waving in the breeze seems to give solace to an otherwise dangerous and unforgiving landscape. It provides comfort and a feeling of safety that we are finally “home,” especially after we are through the gate. With Old Glory prominently displayed above, we knew we made it.

The week of June 14 is designated as “National Flag Week.” Please honor your flag and its history by displaying it during that week. Betsy Ross would be proud.

Jack Evensizer is a resident of Dalton Gardens. 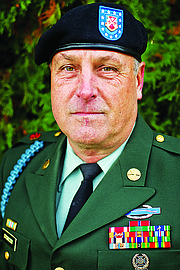