‘We’ll dust ourselves off’

Sen. Jim Risch discusses the COVID-19 outbreak during the Coeur d’Alene Rotary meeting in The Coeur d’Alene Resort on Friday. “We’re in a bad position on this thing,” he said. “This should not have happened.”
DEVIN WEEKS/Press

Vicki Risch, a former first lady of Idaho and Sen. Jim Risch’s wife of 52 years, says hello to Rotary members during a meeting in The Coeur d’Alene Resort on Friday. (DEVIN WEEKS/Press)

COEUR d’ALENE — If one thing is ever clear when Sen. Jim Risch speaks at a local event, it’s his unwavering pride and love for America.

"When we get off the airplane from overseas, I get up and kiss the ground," he said. "There is no better place in the world than the United States of America."

He has that same love for Idaho, and feels it every time he comes back from working in Washington, D.C.

“We all know that we’re different, but let me tell you, we are different,” he said. "It's a great place to live."

Risch, R-Idaho, was the guest speaker at the Coeur d'Alene Rotary Club's Friday meeting at The Coeur d'Alene Resort. He jumped right into the topic on many people's minds — COVID-19, which “looks like it’s going to be with us for a while."

He said at the beginning, it was expected to run the same direction as other viruses, that it would peak and go away.

“That didn’t happen," he said. "So we’re dealing with this, and we are probably going to deal with it until they do make some breakthroughs on the vaccine or on therapeutics, one or the other or hopefully both.

“We’re struggling right now," he said. "We’re in a bad position on this thing. This should not have happened."

Through several viral outbreaks in the past couple decades, America has learned a few lessons, but not enough. He said one thing we’ve learned this time "that is very clear, is that this is going to happen again. This is not a one-off."

America is in a unique time, he said.

"It’s really hard to believe that the year’s only half over, and we’ve been through an impeachment, we’ve been through some massive race riots, and we’re in the middle of this pandemic, the likes of which we haven't seen in generations. And the year’s only half over. And by the way, we have a little election coming up this fall," Risch said. "Things are tumultuous to say the least, but we as Americans are notorious for needing to do these kinds of things and rise up after a difficult time.

"We’ll get through this," he said. "We’re Americans, and when this is over we’ll dust ourselves off, stand up."

He said his No. 1 priority in the Senate is to organize a go-to entity that will respond to health crises like COVID.

"On a bipartisan basis, we’ve crafted a bill," he said. "It’s going to put together an entity that is going to respond, so somebody can pick up the telephone and say, ‘We have a problem. It is a very contagious disease. We need an entity that will do something about it.’ Right now, that’s the World Health Organization."

He said the WHO does have an entity that is supposed to have that function, but it is small and greatly underfunded.

"They are a challenge for us, but look, we’re ready for challenges. That doesn't bother me in the least," he said. "But, if we’re going to deal with them, we have got to deal with a country that will develop and live by the rule of law, that will develop and live by the international (rules) that all the rest of us developed countries have been living with for decades or centuries.

“They’re not an enemy, but they are a challenge, and they are an adversary," he said. "And that is true economically, it is true militarily and it is true culturally."

One Rotarian asked Risch, “Should I not sleep well at night because of North Korea?"

North Korea isn't the problem, he said. It's Iran.

"The Iranians are a whole different kettle of fish,” Risch said. "The good news is that 30% of Iranians are 30 years old or younger and they don’t buy this BS that the top is putting out. In the meantime, man, I hope they don't make a mistake."

“If you don’t have rule of law, you don’t have anything," he continued. "That’s what distinguishes us as the human beings on this planet that lead the way." 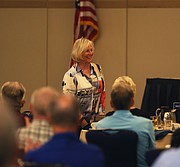 Vicki Risch, a former first lady of Idaho and Sen. Jim Risch’s wife of 52 years, says hello to Rotary members during a meeting in The Coeur d’Alene Resort on Friday. (DEVIN WEEKS/Press)