After 27 years of work (so far) Eric Stanley is passionate about the United States Postal Service.

“For a long time I have believed that the Postal Service has been an unsung hero,” said the Coeur d’Alene Postmaster.

Although initially a “Christmas casual” worker for six months out of the year while finishing his degree in history and sociology at Idaho State University, Stanley came to appreciate the benefits of working for the Postal Service.

“I was going to be a teacher, but I wound up here.”

“And boy, I’ve done a lot of different positions for the post office.”

In the past Stanley has worked as a mail clerk sorting mail for carriers, a window clerk working with customers, a mail processor, and a carrier.

His work has allowed him to travel, taking roles at a total of 14 post offices in four different states in the region.

Stanley thinks many don’t realize what goes into mailing a letter to grandma in Florida.

“Everyone expects for mail to go in and out, but they don’t think about the process and how many people have to process that mail.”

Jumping from acceptance personnel to mail processing, being driven and flown across country, and jumping back to processing and a mail carrier, letters and packages go through several stages to arrive at their destinations within an average of four to five days.

“And for 55 cents for that letter it’s a pretty amazing deal in reality,” said Stanley.

“We send so much mail through letters, packages, and – not knocking other companies, but we do send it cheaper.”

In fact, the USPS is partially responsible for delivery on behalf of the “competition,” whom Stanley says are actually business partners.

Companies such as UPS, FedEx, and DHL rely on the USPS, which has mandated universal service, to deliver anywhere between 500 and 2,000 parcels a day on the last leg of their journey.

“We have 11 full-time residents that rely on the mail boat to bring them everything,” said Stanley. That number swells to up to 80 in the summer.

“There is no other service that delivers to them that I know of.”

The motorized boat route is one of two in Idaho and approximately 18 remaining in the nation.

“Right around 10 percent of all boat routes left are right here in [north] Idaho.”

With their mandated universal service, the USPS is often the only mail carrier to reach some parts of the country, including Clayton, Idaho’s population of seven.

The post office also plays a role in local commerce through mail advertising.

“[Mail] is still one of the least expensive ways to advertise and to make sure that everybody in a community is aware of a particular business,” said Stanley.

“They may not realize exactly how much they rely upon us, but they really do.”

Of course, most routes are ‘curbside’ mailbox routes or walking routes like Brewer’s, who walks his route.

“It’s really nice in the summer. It’s a little treacherous in wintertime, but… I enjoy it.”

Winter walks can be peaceful in the snow, but the only weather he can’t take is rain.

“I hate it when it rains, because your mail gets all wet. but other than that it’s a pretty good job,” Brewer said. “I enjoy it.”

Brewer says the job is not always as simple as it seems. Although it became easier when he received a set route, when he started as a city carrier assistant, he had to work different routes every day.

“It was a little harder that way because you had to know every single route, but…you get to know everybody on your [own] route so it becomes easier that way,” said Brewer.

Mondays and days immediately following holidays, when others might slink back to work, are busier for carriers who have greater volumes carried over from weekends. End-of-the-year holidays are also notoriously busy for postal service staff, although Stanley says many employees enjoy the hustle and bustle.

The service has been even busier lately, however.

Brewer says the USPS has gone from processing about 30,000 packages a month during the holiday season to close to 50,000 in recent months.

“ [We] have definitely seen an expansion in the amount of parcels people are ordering and not wanting to go out, which is completely understandable,”

“I’m not complaining. I’m thankful I was able to have a job to work through during this uncertainness,” said Brewer.

“And we’ve played an important role in making sure that the community gets what they want or need to stay comfortable and safe themselves,” Stanley added.

And another struggle of the job? Pets.

For mail carriers, canines really do pose a threat. Last year, there were more than 37,000 dog-related injuries to USPS carriers across the country, although Stanley says Coeur d’Alene has only had a couple bites and a few chases.

Earlier this year, Brewer was chased into the back of a truck by one big pooch. A few weeks ago, he jumped a fence and used dog spray to evade another.

“But most dogs are really nice,” Brewer said.

Stanley suspects it’s the breaking of routine that scares otherwise well-behaved dogs into pursuit or attack. Normally, carriers leave soon after dogs begin to bark. But when they stay, perhaps to have a package signed, the pooch may grow concerned, shifting into protective mode when the routine varies.

“Unfortunately given the right circumstances, any dog will bite.”

Still, Brewer looks on the bright side.

“I got a lot of puppies on my route which is nice, so they get to grow up with me on the route.”

That goes for the rest of the family, too. After only a couple of years on his route, he has already begun to get to know his customers and watch their kids grow up.

“We are in the people business so also we talk to people. It’s kind of a friendly environment when we’re out there so I think customers enjoy it. Hopefully they do,” said Brewer.

That is a long tradition for mail carriers, who have been a connecting thread of local communities since the postal service began with the Continental Congress in 1775.

“There is a certain amount of satisfaction, I think,” said Stanley, “that goes into it every day knowing…we are probably bringing a smile for six or 7,000 people just right here in my little community.” 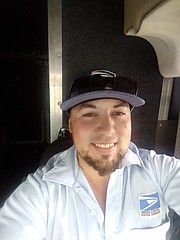 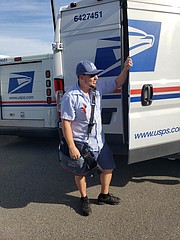