Best Christmas present? Each other

A dozen years ago, we bought our first fake Christmas tree. The minute we brought it home from Shopko, we were thrilled that the days of pitching pine skeletons into a cold-hearted Dumpster were done.

So was our cat, Karma.

Now classified as a Super Senior by the veterinarian, Karma curls up under the very tree she used to climb, her personal wire-and-plastic Mt. Everest.

To this day when I pull the tree out of its box and go through the exercise of straightening out the branches, I find little clumps of gray fur, decorations departed dearly from a climbing cat to her loving family. Some of those clumps deep inside the tree are near the top.

That's why there's a gray beast on today's Press Christmas for All graphic, looming over the star and representing the most successful fundraising campaign we've had in 35 years. On those occasions when CFA has reached goal, the shining star atop the tree was as good as it gets. This year we had to one-up that tradition, climbing above the previously stellar summit.

Which brings us to the second Christmas story. It's about another kind of karma; the kind that many of you know all about, because you created it.

Not only did this longstanding program have its best year ever, but due to the generosity of all the names listed below and many more who wished to give anonymously, Press Christmas for All passed another milestone. In those 35 years, the program has now raised more than $5 million, with every single penny going to Kootenai County residents who needed a little help.

Keep in mind that for the first chunk of the program's life, Christmas for All didn't seek cash donations. The program started with the idea of residents donating toys, new clothing and other goods.

Each year, volunteers would store all those goodies in whatever warehouse space some kind soul would loan CFA for the holiday season. But it became harder and harder to find and manage a warehouse, so we changed gears. The registered 501(c)3 went to a cash donation model, and $5 million later, the decision is deemed a success.

That success belongs to four groups: the donors; the volunteers; the vendors with whom CFA works to supply (at cost or lower) important services and goods; and the referring partners - local nonprofits that vet the recipients to ensure each is receiving a hand up, and not a handout.

Until two years ago, the program awarded small-denomination gift cards to almost any Kootenai County resident who filled out an application. Recognizing a need for change, CFA moved to a very specific, targeted program making meaningful changes in the lives of county residents striving to escape poverty - sometimes situational but often, generational.

You can thank Charity Reimagined for that, as Board Members Maggie Lyons, Elaine Kingston, Amberly Bunch and Joyce Dexter provided both the inspiration and the perspiration throughout the year. They got some help down the holiday homestretch from Sholeh Patrick.

But the brightest spotlight belongs on the donors, legions of generous, compassionate people who see great need around them and are willing to do something meaningful about it. Together, they set an all-time CFA fundraising record. They carried the program past the $5 million mark. And they did it with a joyous resolution that rubbed off on others.

God bless them, every one.

David and Brenda Oliveria; Gary and Margaret High, in memory of Howard Harder and all the Covid-19 victims; Milton and Margaret Schauble, in memory of Michael and Catherine Schauble; Craig Brumfield, to those that lost their lives to Covid-19; Holly and Daisy Gleaves; 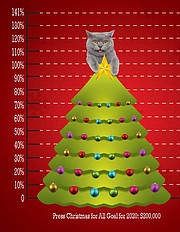