Three months later, she wrote an op-ed published in newspapers across the state criticizing those who accept “handouts” and other “unearned income.”

The money was offered to employers under the $2.2 trillion coronavirus aid bill passed by Congress in March. PPP was an emergency program aimed at keeping workers on the job at taxpayer expense at a time when revenue for many employers had collapsed. The money was provided as loans to be forgiven if the recipients showed that most of it was spent on payroll.

One of McGeachin’s businesses, J.R. McGeachin Inc., received two loans, one valued at $281,853.40 and the other at $32,873.47. The address listed for both loans is that of her Idaho Falls-based wholesale transmission-parts business, Idaho Transmission Warehouse, which has an outlet in Boise.

McGeachin also owns or co-owns other businesses, including one that remanufactures parts that transfer energy from a vehicle’s engine to its transmission; and a bar, The Celt Pub & Grill, in Idaho Falls.

The loans came to light after the court-ordered nationwide release Tuesday night by the U.S. Small Business Administration of PPP loans under $150,000. Larger loans were disclosed earlier.

The first publicly released data about the loans provided only a limited look into businesses receiving them, but a lawsuit by multiple news organizations led a federal judge to order the SBA to release more information. As a result, Idahoans can now get a better look at how much money Idaho businesses received.

“Like many small business owners, our family businesses have been harmed significantly by the heavy hand of government in 2020,” McGeachin wrote Thursday in a Facebook post shared across social media. “In order to keep as many of our employees on staff as possible, we took advantage of the partial restitution made available through the PPP. The money provided represents just a small fraction of the revenue lost, of course.”

The first loan to her business helped to protect 28 jobs, according to the SBA data, whose numbers were reported by the banks and other lenders that distributed the funds to employers. The second protected seven jobs. Both were dated April 28.

McGeachin, a former state legislator from Idaho Falls, is not the only elected state officeholder to accept federal coronavirus relief money in Idaho.

For example, state Rep. Joe Palmer, a Republican from Meridian, got $10,300 in PPP loans for his consignment store. State Sen. Mary Souza, a Republican from Coeur d’Alene, got a $66,900 PPP loan for her event-planning business. State Rep. Mike Moyle, a Star farmer and the Idaho House majority leader, received $10,000 in a grant administered by the state.

McGeachin is an outspoken critic of the financial support from the government. In a July op-ed, sent to multiple media outlets, she said she believes Idaho can “move away from debt-financed spending and other programs that foster dependency.”

And she has repeatedly said Gov. Brad Little’s strategies for fighting COVID encroach on businesses and freedom. Early last spring, when Little issued a stay-home order to curb the virus’s spread, McGeachin objected to it.

That didn’t stop Little from appointing her in April to his Coronavirus Financial Advisory Committee, which Little uses to help guide his decisions about spending the $1.2 billion Idaho received from Congress for coronavirus relief. That money is in addition to the PPP loans, unemployment-compensation supplements and other federal relief funds that have flowed to Idahoans.

“I consider it my duty to represent the taxpayers of Idaho — the ones ultimately paying the bills — and to be a voice for fiscal restraint and responsibility, even when profligacy may be in vogue,” she wrote.

In her Thursday post, she again promoted free markets over government intervention.

“I find it disturbing that the media and partisan interests would shame small business owners for keeping their employees whole,” McGeachin wrote. “Would they prefer Idaho families go hungry instead?

“In a truly free market devoid of government lockdowns and other mandates, our businesses would be operating as normal and our employees’ incomes would be secure. We would certainly prefer not to need PPP loans. Let us work toward a brighter future where freedom is prioritized over fear and government restrictions and programs designed to counter their harmful effects are not necessary.” 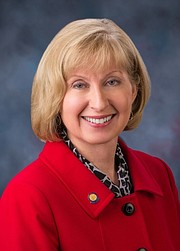