Dr. Jeff Meldrum of Idaho State University holds a cast of ... well ... a big foot. Meldrum has been captivated by the discoveries and mysteries surrounding Bigfoot for more than 25 years, after he first measured a 15-inch footprint in southeastern Washington.
Courtesy of the International Cryptozoology Museum

A frame from the now-world-famous Patterson-Gimlin film, which captured footage of a mysterious creature wandering the woods of Northern California in 1967. (Courtesy of Bob Gimlin)

A recent study with some suspect math suggests Bigfoot appears more often in Idaho than almost anywhere else in the country.

The latest finding came from Satellite Internet, a rural internet provider with a lengthy marketing content reach whose recent claim to fame included a June study that showed Idaho topped the nation in UFO spottings per capita. That study broke down the number of UFO sightings by state over the course of 2019, divided each state’s population into 100,000-person increments and determined Idaho is E.T.’s favorite home away from home.

Last week, the same company claimed Idaho has the fourth-most Bigfoot sightings in the country per capita, demonstrating that not only are we not alone in the universe, we might not even be alone around Mica Peak.

Just so we’re all on the same page, Bigfoot is the generally mythological term for a large, upright-walking primate yet to be established by the scientific community as real. The name references tracks that often look like human feet, only in monstrously larger dimensions.

Sightseers in wildernesses around the globe have estimated the humanoids can grow taller than 10 feet, weighing between 600 and 1,000 pounds.

The internet company behind its mathematical analysis of Bigfoot sightings delivered its finding hand-in-hand not only with some fun anecdotal speculation, but also with what is easily the greatest meandering product pitch in the history of cryptozoological press releases.

“Some deny that Bigfoot is real,” Satellite Internet’s presentation reads, “but with so many reported sightings, maybe he’s not only real but not alone. Could there be bigfoots all over the country? (Or is it bigfeet? It’s definitely not bigfeets — unless it’s used as a term of endearment. And if you’re that close to one of these hairy homies, let us know. We’ll hook them up with one of the best rural internet providers to help them stay in touch.)”

Shameless plug aside, the company’s content wing brings up a good question. With so many sightings, isn’t it acceptable to speculate that Bigfoot walks the woods? For that matter, is it unreasonable to think more than one might live here in Idaho? And yeah: What is the plural of the word “Bigfoot”?

But first, the math. Satellite Internet drew its data from two sources: the U.S. Census Bureau (for state population in 2019) and the Bigfoot Field Researchers Organization, or BFRO (for the number and location of sightings). This was essentially the same formula it used for its UFO study that circulated among newsrooms across Idaho and around the country. Nationwide, Americans have reported 5,368 confirmable Bigfoot sightings. Only 93 of those came from the Gem State, putting us 22nd on the nationwide list and well behind our westerly neighbor Washington and its league-leading 676 sightings.

But factor in Idaho’s relatively sparse population of just under 1.8 million people, and we leap toward the top of the company’s list. While Washington still holds a dominant lead of 8.9 sightings per 100,000 residents in this equation, Idaho comes in fourth with 5.2 sightings, just behind Oregon’s 6 and West Virginia’s 5.8. But that math stretches only so far. Objectively, 5,368 American Bigfoot sightings in one year sounds excessive. So we took a second look at the numbers from the BFRO and discovered their report accurately covered total historical sightings. Current population counts from 2019 don’t translate to Bigfoot sightings in, say, 1981, thus invalidating the per capita numbers.

That doesn’t mean the idea of Bigfoot roaming the woods isn’t enticing.

“I’ve never seen one,” Hayden’s Helen Haimes said from her local Super 1 parking lot Friday. “One of my best friends swears she saw one about 20-or-so years ago, when she was hiking the Sierra Nevadas.”

While the Satellite Internet study doesn’t accurately show where Idaho truly lands on the Bigfoot sighting spectrum, our state can claim itself as home to one of the leading scientific minds in the study of the field. Dr. Jeff Meldrum, professor of Anatomy and Anthropology at Idaho State University in Pocatello did not respond to requests for comment for this story, but his fascination in the subject is well-documented and dates back to 1996, where he was sent to Washington state to measure a 15-inch footprint.

“When I was taken out and shown some fresh footprints in southeastern Washington, I was, you know, quite literally set back on my heels,” Meldrum said in a 2006 radio interview with NPR. “...These were tracks that would be difficult to explain as a simple contrivance with wooden feet strapped to one’s boots...And one thing led to another from there.”

That “one thing that led to another” can be seen in Meldrum’s lab, where he has a collection of approximately 300 footprints encased in plaster from around the world. But you don’t have to traverse the globe to walk where Bigfoot reportedly has walked. One of Idaho’s more recent documented Bigfoot-related sightings occurred in Kootenai County near Mica Peak, according to the BFRO’s incident catalog. A nature ride between two young friends on a June afternoon in 2010 turned into a disquieting discovery.

“My 14-year-old daughter and her friend were quadding in the woods behind our property, which are owned by timber companies,” a local only listed as “Donna S.” reported to the BFRO. “They stopped by the waterfalls to look around and came upon a large footprint on the timber trail. It had rained a couple of days prior to this. There are lots of cedar groves and pine in the area and lots of fresh water from streams and waterfalls. They took some pictures with their phones and with my daughter’s friends foot next to it.”

According to the investigator who examined the photographs, the track was roughly 16 inches long.

“The trail is not very wide so this is the only print on flat land,” Donna S. said in her statement. “I tried to get a plaster cast but did not have enough plaster, and it rained before I was able to get more plaster and the imprint was washed away.”

Matt Moneymaker knows the Kootenai County incident well. In actuality, he can speak intelligently about all the incidents in the BFRO’s database. The host of the popular, now-retired Animal Planet program “Finding Bigfoot” was the person who called back after The Press reached out to the research organization for comment, taking this admittedly star-struck reporter by surprise.

“It’s funny when you talk about Coeur d’Alene,” Moneymaker, the founder of BFRO, said from his home in Dana Point, Calif. “Both the Sheriff’s Department and the local fire departments there have access to drones with high-resolution thermal imagers. The fire departments have access to much more powerful drones that can spot more from greater distances and with more detail.”

Moneymaker added that advancements in technology — particularly in regards to the capabilities of drones and high-end scopes — will one day expose the reality of Bigfoot. And the chances of it happening in hunting lands like North Idaho, where a disproportionate percentage of the population recreates outside, is strong.

“These animals are basically nocturnal,” he said. “They’re moving around after dark. For them, the later, the better...As the costs of some of these tools go down, and as tools like thermal imaging become more available to the public, and as areas like Coeur d’Alene continue to grow, I think we’ll have unprecedented footage that will be compelling to the scientific establishment.”

So now we have another factor to consider in North Idaho’s ever-expanding growth crisis: Bigfoot.

Maybe Moneymaker is right: We may one day stand face-to-face with — or at least recognize irrefutable proof of — Bigfoot. Maybe Satellite Internet is right in the sense that we’ll never quite be able to pin down the science behind the myth. Maybe the truth lives somewhere in between. But I had to come away from this story with some kind of certainty. So I reached out to Moneymaker for one last question: Off chance, does he know the plural of the word “Bigfoot”?

A frame from the now-world-famous Patterson-Gimlin film, which captured footage of a mysterious creature wandering the woods of Northern California in 1967. (Courtesy of Bob Gimlin) 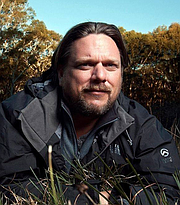