‘Why are we tolerating this?’

People who joined the freedom rally in Coeur d’Alene on Sunday wave to drivers passing by on Interstate 90.
BILL BULEY/Press

BILL BULEY/Press Della Bennett carries a flag as she walks along U.S. 95 during Sunday's free rally in Coeur d'Alene.

BILL BULEY/Press Some of the crowd who turned out for Sunday's rally listen to speakers in the old Shopko parking lot.

About 200 turn out for freedom rally in Coeur d’Alene, call for governor to reopen state

COEUR d’ALENE — Kim West described herself as “nobody. A little girl that lives out in the country.”

But the Plummer woman was a driving force behind a rally Sunday in Coeur d’Alene that attracted about 200 people calling for the reopening of the state.

“They can wear their masks and they can get a vaccine, but don’t condemn us for fighting for your freedom,” West said as the crowd gathered in the parking lot of the old Shopko store.

West gave a short speech before the group, many waving American flags, headed out to march peacefully along U.S. 95 on a sunny afternoon, stopping on the overpass to wave at traffic passing below on Interstate 90.

They were unanimous in their opposition to Gov. Brad Little’s stay-home order issued March 25 due to the coronavirus. They ignored social distancing guidelines as they stood side by side, some linking arms. No one was wearing a mask.

Cries of “Open Idaho” and “USA” filled the air. Some held signs that read “All jobs and businesses are essential,” ‘“Governor Little, you’re fired,” and “Home of the brave? Land of the free?” One man wore a shirt with the message, “Get Idaho Working Again.”

Some passing drivers honked their horns in support. The crowd, a mix of young and old, often yelled and waved back.

West said that yes, the virus is real and it has hit some places harder than others, but it’s not a reason to shut down the country’s economy and tell people they can’t work.

“This virus will bankrupt more people than it kills if we don’t get back to work,” she said.

Idaho, West said, must be opened now and not in four stages, per Little’s recently unveiled plan.

“We can’t wait months to save our businesses, our homes, everything we’ve worked for in our entire lives,” she said.

Martin Finley of Rathdrum joined the rally because he said it’s time to get the country open. The death rate of the coronavirus, he said, is about the same as the regular flu, “and we’re shutting down the economy over that.”

“There’s going to be more devastation because of this shutdown,” he added.

Finley said he works in the oil industry, which has taken a huge hit, and he took a pay cut, because travel has come to a standstill.

“I went from a pretty decent job out there to entry level,” he said.

Marc Eberlein of Post Falls, who is seeking the Idaho Senate District 3 seat, asked the crowd if the government-ordered shutdown and call to stay home was constitutional. He asked if it was statutorily allowed. No, came the answers.

“Why are we tolerating this?” he said. “Sheep. We rolled over.”

Eberlein said the job losses due to the shutdown — 26 million jobless claims nationwide in five weeks — have passed that of the Great Depression. He asked how many were “getting sick and tired of this.”

“The real virus is in our government, and that’s what’s destroying our nation,” he said.

Eberlain urged him to work to open the state with fellow Commissioner Leslie Duncan.

Brooks called on the people to claim their rights.

“Don’t let the government tell you to stay home,” he said. “If other people want to stay home, let them stay home. As for me, I’m going to work tomorrow. I’m going back to work.”

The marchers seemed in good spirits. They included married couples, singles, retired folks and a few families. There were no police.

Some came because they want to be able to attend church services again, which they will next week as Little’s recent plan said churches can reopen Friday.

Isata Williams attends The Altar in Coeur d’Alene and said it’s important to her life.

“We need the church, we need to worship, we need fellowship,” she said.

Brady and Della Bennett of Coeur d’Alene both held flags high as they walked together along U.S. 95.

Asked why she was there, Della Bennett offered a short answer: “Freedom for America.”

Her husband said no one should be deemed nonessential or essential.

“I think everybody is equal. They don’t have the right to shut everything down the way they have,” he said.

The Bennetts said they are doing OK, as they are both still working.

“I feel for the people who aren’t working right now and can’t pay their bills,” Brady Bennett said.

Sarah Raichart of Post Falls said she’s concerned about constitutional rights as pastors have been arrested for holding church service, and in one state, a drive-in service was closed by police and people attending were cited when they refused to leave.

“It’s great to get out and protest. I think conservatives haven’t learned to stand up and speak out,” she said.

Terry Switzer of Post Falls was also glad to see a strong turnout for the freedom rally.

“It’s good to see people making an effort to fight and stand up,” he said.

He said he wanted to be there because people have a right to work and should not be told to stay home.

“I disagree with everything that’s going on,” he said.

Beverly Guenette of Coeur d’Alene held a sign that said “Open Idaho” as she stood on a corner.

She said she didn’t like the choices that were being made by the government on which businesses could be open, and which had to close. She and others at the rally questioned why large stores are allowed to have hundreds of people inside at the same time, yet small shops that generally have a few people inside at one time are still closed.

Guenette said Kootenai County, according to the most recent report, has 59 coronavirus cases and no deaths. Statewide, there were 1,836 cases and 54 deaths. She said she did not want to see anyone die from the virus, but she believed the response that has put millions out of work, forced thousands of businesses to close and devastated the economy was wrong.

“I very disappointed Gov. Little took this opportunity to close us down,” she said. 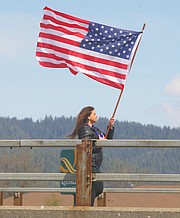 BILL BULEY/Press Della Bennett carries a flag as she walks along U.S. 95 during Sunday's free rally in Coeur d'Alene.

BILL BULEY/Press Some of the crowd who turned out for Sunday's rally listen to speakers in the old Shopko parking lot.