In social media terms, you would call it “going viral.”

But 50 years later, Chris Riggs Whiteman says she and other Coeur d’Alene High classmates had experienced their “15 minutes of fame.”

She's referring to a photo of her and the rest of the 1971 CHS Junior Prom royalty that had spread over two pages at the center of iconic Life magazine, America’s erstwhile window on the country.

As King Ron Geuin, Queen Susie Phelps, Chris and the rest of the court posed for a yearbook photo in the old Elks Building, they didn’t know award-winning Life photographer Leon Kuzmanoff was also there, camera in hand. Kuzmanoff had been roaming the country, shooting rural scenes for a photo essay, to be headlined: “Going back to a simpler America: IT’S ALL STILL THERE.”

His journey brought him to Coeur d’Alene, where, the magazine said, “a bunch of blue-jeaned kids decorating a local hall, led (Kuzmanoff) to a ritual commemorated across the country, the Senior Prom."

Actually, the high schoolers were dolling up the Elks on Lakeside Avenue — the Innovation Collective today — for the Junior Prom. And the photographer stuck around to film a slice of Americana.

That may be so. But the prom royalty was in focus, too, the king and queen with crowns on their heads, seated on oversized chairs, the former king (Shawn McMahon) and queen (Kathie Brack) peering over their shoulders, and the court fanned out in fours on either side.

Kuzmanoff’s photo of the Coeur d’Alene kids appeared in the July 7, 1972, edition of Life, with 10 other pictures, including shots of a small Black church in Snow Hill, Ala., a row of unattended rocking chairs in Amish country, Pennsylvania, and a farmer and his wife standing in a field in Lebanon, Mo.

Chris knew nothing of Kuzmanoff or the Life feature until a letter from her mother, Lucile Riggs, caught up to her in Denmark in mid-summer 1972. After graduation, Chris and 30 others in the region had joined a People to People Student Travel tour to 13 European countries.

In her letter, Mrs. Riggs said she asked her sister in Bremerton, Wash., for her copy of Life because it was sold out locally. Chris and friends Jan Huetter and Lynette Grannis rushed to a nearby kiosk to buy one.

“We couldn’t read a word of it because it was in German,” Chris said. “But we bought it anyway.”

In that same year, 1972, Life magazine suspended weekly publication, citing a decline in the newspaper business and a poor outlook for advertising. It would return as a monthly edition in 1978 and later as a newspaper supplement before shutting down in 2007.

Chris and other Prom royalty remained in their hometown, worked, raised families, and aged. One, King Ron Geuin, passed away. And a half century later, at the 50th reunion of the Class of 1972, eight of the 12 in the Kuzmanoff photo posed for a golden anniversary version.

Glory days, well, they pass us all by.

“Yaya,” as Ruth Dixon interprets it, represents “freedom” and a circle of close, female friends.

“I was really wild when I was younger,” the Post Falls woman told Huckleberries. “I’m still wild. But it’s an old wild.”

Ruth chauffeurs that vanity plate around on a white Toyota mentioned in Huckleberries (Jan. 1): “IMAYAYA.” She ordered the vanity plate 40 years ago while living in California and continued to do so when she moved to Idaho 15 years ago.

Her friend, Jenifer Tyra, says soon-to-be-80 Ruth is “one of the most inspiring people I know.” And explains why: “She is currently a personal trainer (who has blown through three knee replacements due to her hiking obsession), a former police officer, a volunteer in her church, a Jesus follower and 40 years sober.” And: “She has spiky white hair and snorts when she laughs. She is a firecracker.”

Ruth snorted when she heard Jenifer’s description and said: “I’m just out there.”

There are many reasons why Coeur d’Alene old-timers remain such fans of WWII ace Pappy Boyington. So much so that, in September 2007, they named the local airfield after him. He was born here. He grew up in nearby St. Maries. He became a war legend, shooting down 28 enemy aircraft before becoming a tough-as-nails POW. In 1958, he wrote a book about his experiences with the famed Black Sheep Squadron that became a bestseller and inspired a TV series: “Baa Baa Black Sheep.” And he was feisty, colorful, incorrigible and fun-loving.

On Jan. 11, 1988, the Coeur d’Alene legend died at age 75 and was buried at Arlington National Cemetery.

They broke the mold when Pappy was born.

• Poet's Corner: The lake was icy New Year’s Day/but they went swimming anyway./Reasons why are somewhat hazy/maybe they are just plain crazy — The Bard of Sherman Avenue (“Polar Bear Plunge”).

• Dissing on ex-Californians was an established pastime of locals long before I arrived in the INW (1977). But there was one Californian welcomed with open arms: C.J. Buck. Twenty years ago today, Buck announced he was moving Buck Knives — and 200 jobs — from El Cajon to Post Falls.

• Fan Mail (re: Ed Pommerening of Kingston, the guiding light behind the reforestation of the Silver Valley, Huckleberries, Jan. 8): “Sorry to hear of his passing. Thanks for giving credit to a visionary forester. I'm always amazed now when passing through the Valley or riding the Gondola that one man with a vision could have such an impact” – Clyde Peppin of Hayden.

This is about the time, 15 years ago, when Keith Erickson amused readers of my old Huckleberries Online blog with 10 reasons why he hated winter. The former spokesman for the city of Coeur d’Alene, under Steve Widmyer’s administration, listed them as: 1. Nasty driving conditions, 2. Shoveling snow, 3. Lingering darkness, 4. Huge heating bills, 5. Dangerously slick parking lots/sidewalks, 6. Giant middle-of-the-street snow berms downtown, 7. Dirty cars, 8. Power outages, 9. Cabin fever, and 10. People who tell me to "deal with it." And that about sums things up. Where’s the groundhog? 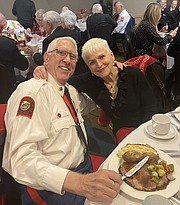