Grace graduated in 1943 from Wyoming Seminary, a Methodist college preparatory private school and boarding school located in Kingston, Pa., and continued her education at Syracuse University, graduating in 1948 with a BS Degree in Nursing. While there, she met Rud, the love of her life. They were married for 58 years until Rud’s passing in 2007.

Grace and Rud raised their two daughters, Barbara, and Joyce, in River Edge, N.J., and enjoyed summer vacations spent at the Jersey Shore. Grace enjoyed needlework, writing letters, church volunteer work, and baking her well-known “Busy Day Cake” in a home that she blessed with her love and devotion.

In 1970, Grace and Rud relocated to Houston, Texas, due to a company transfer. They took advantage of the many cultural and entertainment venues offered in the metropolitan city.

In 2009, Grace moved to Post Falls, Idaho, to live closer to her daughters. She was one of the first residents to reside at Garden Plaza Independent Living facility. Due to the need for additional care, Grace moved to The Lodge Assisted Living facility in Coeur d’Alene and appreciated the care she received there during the past three months.

Grace was predeceased by her parents, Reverend John, and Bessie White, her two younger brothers, Norman and Donald White, as well as her nephew, Jay White.

Grace was a member of the Community United Methodist Church in Coeur d’Alene. The family will celebrate Grace’s life privately.

“We speak your name with love and pride. We smile with tears we cannot hide. We thank you for the years we shared. The love you gave, the way you cared … Forever in our hearts.” — Toni Kane

Arrangements are provided by Yates Funeral Home. Online registry and condolences may be found at www.yatesfuneralhomes.com. 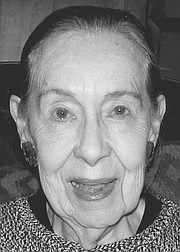