Karl and Hannah Haakenson were married April 10, 2022, at the Hagadone Event Center in Coeur d'Alene.

The wedding was officiated by longtime friend, Bill Davenport.

Hannah graduated from Post Falls High School in 2013 and North Idaho College with an A.A. in English. She is the Programming and Youth Development Manager at the Salvation Army Kroc Center in Coeur d'Alene.

Karl graduated from Coeur d'Alene High School in 2013 and the University of Idaho School of Engineering in 2018, and is a Staff Engineer with T-O Engineers in Coeur d'Alene.

After a honeymoon in Leavenworth, Wash., the newlyweds will reside in Coeur d'Alene.

Colleen "Coke" Hough was born May 8, 1929, in Snohomish, Wash., to Tena and Alex Wood. She is the third of six daughters in the family.

She was raised in Snohomish, and moved to Coeur d'Alene, where she graduated in the class of 1948, and has lived here for more than 65 years.

She attended Brigham Young University in Provo, Utah, before meeting Robert "Bob" Hough, who was working in Provo as a radio broadcast journalist. They married in Coeur d'Alene on Aug. 12, 1950.

She enjoys going for walks, swimming, and spending time with family and friends. 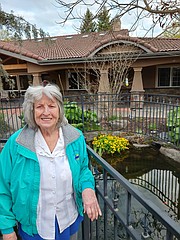