Photo courtesy Idaho Fish and Game A dead tundra swan on Coeur d'Alene River, likely due to poisoning from historic mine waste contamination.

COEUR d’ALENE — Bev Twillmann saw hundreds of swans on both sides of Highway 97 as she drove toward Harrison.

The sight of the graceful, long-necked, white birds near the Coeur d’Alene River would have been beautiful — but for the dead ones along the shoreline and the road.

Twillmann wrote that one bird was confused, unsteady and wandering near the center of Highway 97, even sitting down in the middle of the road with cars whizzing by.

“It was heartbreaking,” she wrote.

From 2005 to 2021, an average of 52 swans died each year in the Coeur d’Alene River Basin because their food source is contaminated by a century of mining waste.

This year is a “high mortality” year because swans arrived earlier than usual in the Coeur d’Alene River Basin, in early February, and have stuck around.

Brittany Morlin, U.S. Fish and Wildlife Service biologist, said before the annual migration is over, several thousand swans will visit the basin. Many are feeding in contaminated habitat as they move between wetland areas.

Earlier this month, a team of biologists sampled sediments and fecal samples from the surfaces of wetlands in the lower basin where swans were recently observed.

Swans were captured to collect blood and fecal samples and affix marking devices, such as colored neck collars and satellite collars.

Of the 17 swans that were captured at night and released, three or four have already turned up dead.

“It’s likely to be a year with a high number of mortalities,” Morlin said.

She added the number of swan deaths has many variables, including how many swans arrive, how long they stay and weather conditions.

According to Fish and Game, mining waste was discharged into the Coeur d’Alene River and its tributaries for much of the 20th century.

“This caused metals like lead to accumulate in many of the marsh soils along the river,” a 2019 Fish and Game report said. “Around 95 percent of wetland habitat in the lower Coeur d’Alene River Basin contains lead levels toxic to swans and other waterfowl.”

Fish and Game said tundra swans are particularly vulnerable because they burrow deep into the mud to feed on roots and tubers, increasing the amount of exposure to contaminants like lead in the soil.

Kim Prestbo, EPA project manager, said it’s an issue that has been tracked and studied for decades. The solution is to clean up the mess.

But that’s not easy.

There is a high concentration of mining waste scattered over an extremely large area — about 30 river miles. It will take decades and hundreds of millions of dollars to undo the damage.

“The EPA has been working in the low basin consistently,” Prestbo said.

But it is a slow process.

The plan to restore wetlands to functioning habitat includes prioritizing high-waterfowl use in the basin and working to “incrementally” clean them up.

Dave Leptich, Idaho Fish and Game, said they are looking at 20 to 30 years. It’s going to take a lot of money, a lot of agencies and a lot of time to turn things around, he said.

There are success stories.

The Schlepp Wetlands Restoration area in the lower basin has over 400 acres of a clean and productive wetland habitat used by swans.

In 2015, Fish and Game habitat specialists restored 65 acres of wetlands in the Robinson Creek Project with funding support from the Idaho Department of Environmental Quality, EPA, and the Partnership.

The EPA and others are continuing efforts to create more clean feeding habitat in the lower basin.

“We are starting to see some improvement,” Prestbo said.

The Partnership published a comprehensive Restoration Plan for the Coeur d’Alene Basin in May 2018. The plan lays out a framework for restoring natural resources like fish and waterfowl that were injured by the release of historic mine wastes.

The Partnership has about $130 million to carry out its work.

“A real challenging bird to capture,” he said.

Leptich said geese and ducks are also affected by the contaminated mine waste in the basin, but swans are "affected more than other species."

And because they are large, white birds, easily visible off roadways, they receive the most attention.

Leptich said Fish and Game receives a “fair number of calls” each year reporting the dead and dying swans and asking what is happening.

Locals are familiar with the situation, but new arrivals are not.

While the concern is appreciated, Leptich said there really isn’t anything one person can do to save the swans.

“It’s a bigger problem than an individual can address,” he said. 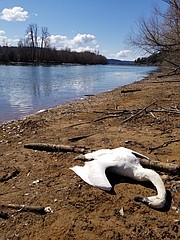 Photo courtesy Idaho Fish and Game A dead tundra swan on Coeur d'Alene River, likely due to poisoning from historic mine waste contamination.

This story has been edited to correct the average number of annual swan deaths in the basin.