Coeur d'Alene Brewing Company began operations in 1908 and went out of business about 1915.
COURTESY/Museum of North Idaho

As the U.S. entered the 20th century there were two important issues that came together in a manner that would forever change our culture and economics.

The first issue was the decades-old and ever-increasing pressure from certain groups for the country to enact laws that would make the production, sale and consumption of alcohol illegal.

Second, was the reality that over 50% of the revenues coming into the federal government were from the taxation of breweries, distilleries, transportation and sale of alcoholic beverages.

That being the case, how could Congress make alcohol illegal and thereby destroy the federal government’s main “cash cow” and still be solvent?

The solution advanced was that perhaps an income taxing scheme might be the way to solve the problem. So, in 1916 the 16th Amendment to the Constitution was passed, which ushered in the Internal Revenue Service.

From the start, the money coming into federal coffers was so great that there was no longer any fiscal reason to not “go dry.” So, in 1918, the federal “Prohibition” was passed and the 18th Amendment was soon ratified by the states.

Christian Bernhardt arrived in Coeur d’Alene in June 1907 with the intention of building a magnificent brewery in the city. His timing was terrible. If only he could have seen the future.

Bernhardt was a German immigrant who was an experienced brewer. His initial offering of stock was so successful that he incorporated with local businessmen forming Bernhardt, Dollar and Sanders, Inc. Immediately, 400,000 bricks were ordered and construction of a brewery began on the corner of Mina and River. By late 1908, beer was starting to flow. To name the new beer, a contest was held with first place being $100 in stock. The winning name was “Prince of Pilsen."

In bringing the beer into production many creditors were acquired, but few were being repaid. The lawsuits began to accumulate. Stockholders rebelled, thinking Bernhardt and Sanders were fraudulently running the business. Sales of the beer had not reached a sufficient level to cover costs, so on June 30, 1909, bankruptcy was declared.

The brewery was closed, sold and reopened as Panhandle Brewery. However, the events of going dry by city, state and then by nationwide legislation would ultimately close it for good. It would not be until 1933 that Prohibition would be repealed by the 21st Amendment.

Over the following decades, the old brewery became a cannery followed by a meat and grain storage business, a boat works and a U.S. Forestry storage depot. In 1965, the building was razed, and the bricks sold. The land was sold to North Idaho College in 1968.

The Museum of North Idaho has a new exhibit centered around Prohibition and the effects of the law. In keeping with the exhibit, the Museum’s yearly gala will be held Thursday, July 7 at the historic Jewett House at Sanders Beach. The theme will be a 1920s Gatsby Garden Party with a catered dinner, bar, dancing to the music of the Zonky Jazz Band, croquet, silent auction and a presentation by Architects West. All money raised will go to the building fund for the new museum. 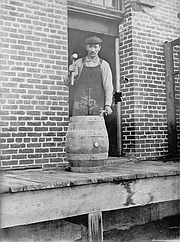 Panhandle Brewery workman putting the top hoop on a wooden beer keg, circa 1913.