John Hunter Smith, 82, of Coeur d’Alene, Idaho passed away peacefully at his home on June 10, 2022, with family and friends by his side.

John lived in Ben Lomond, Calif. until his retirement in 2002 to Coeur d’Alene, Idaho. He was a graduate of San Lorenzo Valley High School and Cabrillo College in California. He served in the U.S. Coast Guard from 1962 to 1970. John worked in government defense most of his career. He was a Captain of Ben Lomond Volunteer Fire Department where he served for 36 years.

In his retirement, John was a member of the Panhandle Kiwanis and the Elks Lodge 1254 (Master of the Grill). He was an avid dog lover to his own and neighborhood dogs. As a weather enthusiast, he kept records for the National Weather Service and reported weather conditions to the local news. He pursued his passion for trains with the Evergreen Railroad Modelers in Spokane Valley, Wash., running Southern Pacific engines.

A celebration of his life will be held at a later date. Remembrances may be made to Companions Animal Center (Kootenai Humane Society) at PO Box 1005, Hayden, Idaho, 83835, or the Evergreen Railroad Modelers at 18213 E Appleway Ave, Spokane Valley, Wash., 99216.

Visit John’s memorial and sign his online guestbook at www.englishfuneralchapel.com 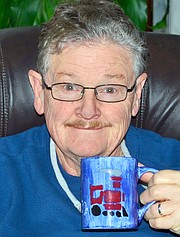