COEUR d'ALENE — It took longer to arrive in North Idaho than it did in other parts of the nation, but the latest development in the ongoing opioid crisis is here, and it is in the form of a little blue pill.

That was the message that nearly 70 people who attended Wednesday night’s Cookies with a Cop event at the Salvation Army Kroc Center received from Idaho State Police personnel and local officials who spoke about the dangers of fentanyl and a new initiative designed to help combat them.

ISP District 1 Capt. John Kempf and Sgt. Jess Stennett kicked off the event with an explanation of what fentanyl is, how dangerous it is and how prevalent it is in our community.

Stennett explained that the pills are haphazardly made in Mexico with ingredients from China, then shipped into the U.S. to be sold by dealers, often sold on popular social media sites and apps. The lack of oversight in the creation of the pills, combined with the cartel’s ability to produce enormous quantities of them, creates a potentially lethal situation for the end user.

“There is no quality control whatsoever,” Stennett said. “That is part of the reason we have such an issue with overdoses … In 2020, we had 33 overdose deaths (in Kootenai County), eight of those were attributed to fentanyl. Last year, we set another record with 38, but 19 of those were attributed to fentanyl. Year-to-date, we are sitting at 13 (overdose deaths) and six (fentanyl-related).”

Kempf said that on a national scale, fentanyl is the leading cause of death for Americans ages 18 to 45 years old.

He stressed that while law enforcement is doing all they can to weed out the dealers of these drugs, another approach is needed.

“We really cannot arrest our way out of this crisis … We build our foundation on partnerships and we will partner with anyone that will listen to us," Kempf said.

The most recent partnership ISP has made to assist in solving the drug problem is with the fairly new Idaho Law Enforcement Diversion organization.

Brandi Clark, Idaho Department of Health and Welfare Psychosocial Rehabilitation Specialist, explained that Idaho Law Enforcement Diversion is designed to provide resources to addicts who want to get clean and stay clean.

It will be implemented July 1, when District 1 ISP troopers will have the option to divert a qualified, interested individual rather than charge them with a felony drug offense. The individual would then receive a referral card for their new case manager that they would need to contact within 48 hours.

The case manager, based at the Panhandle Health District office, will then conduct an assessment of the individual. The person will then be connected to one of the eight treatment agencies Idaho Law Enforcement Division has partnered with in Kootenai County.

“These agencies that we have partnered with have agreed to help get them services as soon as possible, but will also take into account that we’re not trying to put these participants in front of anyone else that needs the services in the community,” Clark said.

Over the course of a year, the enrolled individuals must check in with their case managers twice a week and at the Kootenai Recovery Center once a week, where they will receive recovery coach services free of charge.

“The goal is that they will continue treatment for the entire year process. Then when that year mark hits, the treatment team, along with ISP and the prosecutor's office, will review their case and decide if they meet the standards of recovery. If they do, their original charges are never filed.”

Looking forward, Kempf is excited troopers will have this tool at their disposal to help those in need. 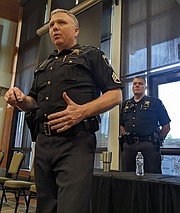