Duo performs at the Hamilton House

From left, Brantley Bacon and Bobby Meader perform at a game at the University of Idaho in 2018. The duo will be performing at the Music Conservatory of Coeur d'Alene on Jan. 28. Photo courtesy of Brantley Bacon

Modern chamber music comes to the conservatory for a Friday Night Live performance.

The audience can hear the work of two music instructors at the Music Conservatory of Coeur d’Alene at 7 p.m. on Jan. 28.

Bacon said he has been playing music since the age of 5 when he was enrolled in a keyboard academy.

“They say if you love what you do you’ll never work a day in your life, and I couldn’t think of anything I’d rather do than compose and perform music,” Bacon said.

Bacon said he loves how he can communicate with other musicians and audience members through the vibrations in the air that shoot out of his instrument and create music.

Bacon teaches piano, jazz piano and percussion at the music conservatory and Meador teaches classical and jazz guitar. They are both also teachers of composition and improvisation, aural skills and theory.

Conservatory director Julienne Dance said she is excited for the concert because while all the music is inspired by jazz, the music will be modern and diverse.

“The fact that Bobby and Brantley have performed together since their high school days can promise a very entertaining and inspiring concert,” Dance said.

The music conservatory is housed in the historical Hamilton House in Coeur d’Alene.

The concert is free. Donations are accepted. 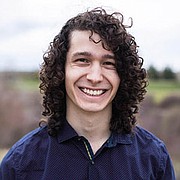