Jerry served two tours in the Army in Vietnam as a pointman from 1965 to 1967. At the time of his discharge he was a sergeant and was awarded the Purple Heart, and Distinguished Service Cross. After his service, Jerry worked and retired from Ramey Truck and Equipment.

Darlene spent her time while Jerry was in Vietnam working in her family owned restaurant, The Pagoda, in Post Falls and giving birth to their first child. Later she owned her own ceramic shop and finally worked and retired from Fred Meyer.

Jerry and Darlene lived in the Spokane Valley until they moved to the Cave Bay Community of Worley, Idaho, over 30 years ago.

Jerry was well known for being able to fix anything, and always had some kind of project he was working on. Darlene loved to cook and entertain, and was dedicated to her church (St. Michael). They both loved spending time with their children, grandchildren, and great-grandchildren. They enjoyed fishing throughout the years and playing at the Coeur d'Alene Casino when their health required them to slow down.

Jerry had a big heart, a stubborn side, and a great sense of humor. Darlene was charismatic, loving and warm-hearted. Both of them always went out of their way for anyone they knew and will be greatly missed by all. 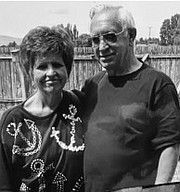