With inside seating for 72, a drive-thru and take-out services, it will be open 10 a.m. to 9 p.m. daily with ice cream items, blizzards and burgers. Outside seating will be added.

Dairy Queen started in 1940 in Joliet, Ill. The company has more than 7,000 outlets in about 20 countries. Its headquarters are in Minneapolis. Check dairyqueen.com.

Adding a wider variety of services with the expansion, Renew Aesthetics & Hydration Bar has moved to 1101 W. Ironwood Drive from, 515 N. Fourth St.

The staff of 15 offers non-evasive aesthetic procedures and overall wellness services with a passion for client care. Treatment is for all injectables, PDO threads, vampire procedures, IV therapy, facial and laser services.

With a variety of electric bikes and accessories, Pedego Electric Bikes has opened at 2500 Old Mill Loop (north of Regal Theater) in Riverstone.

Pedego started in 2008 and has 180 stores with its headquarters in Fountain Valley, Calif. 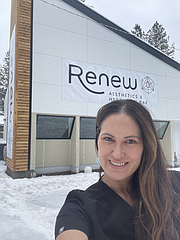