Photo courtesy David McCullough A firefighter responds to the scene of the early morning Dec. 27 crash on Interstate 90 east of Missoula where Tricia McCollough lost control of her truck.

Tricia McCullough was just a few months shy of earning her nursing degree so she could help others when she was paralyzed in a recent vehicle accident.

Now, she needs support as she begins a long road back.

“She is one of the kindest souls you will ever meet and literally lights up a room when she walks into it,” said her father, David McCullough.

He described his daughter as a talented artist, smart, loving and hard-working, someone who has a heart to serve people.

He believes her determination and attitude will be key to her recovery.

“We need to get the word out to get some money raised and get her the help she needs,” he said.

The 22-year-old, who grew up in Coeur d’Alene and attended school here, left her parents’ home late Dec. 26 after a Christmas visit. She was headed back to Helena, Mont., where she was studying nursing at Carroll College and was set to graduate with a four-year degree this spring.

She was about 30 miles east of Missoula on Interstate 90 in a 2004 Dodge Ram early Dec. 27 when she hit black ice and lost control.

The truck crashed into the guardrail, taking out about a 100-foot section, and flipped over. It was stuck and the windows were all broken.

Tricia was trapped, upside down, for about an hour in 4 degree temperature before being rescued and airlifted to Providence St. Patrick hospital in Missoula.

Her father said she suffered a broken neck, was paralyzed, and had a broken arm. A Dec. 29 surgery went well and she was able to move her right arm somewhat.

She has not been able to move her legs, her dad said.

David and wife Gwyn McCullough are trying to raised $350,000 to get her into Craig’s Hospital in Colorado, which specializes in rehabilitation, and to help with other expenses sure to arise as Tricia works to regain her life.

“We want to get her into rehab ASAP," her dad said.

An account at any branch of Wells Fargo Bank is expected to be active today for donations.

A GoFundMe account as of Monday afternoon had raised just over $30,000 from 355 donors.

Rich and Patricia Evans donated $500 and wrote, “Praying for a complete healing from the top of Tricia’s head to the tip of her toes!”

“Many people donating just a little bit can make all the difference to this family and the type of care she gets,” wrote family friend Louis Jackson, who met Tricia the day after she was born at Kootenai Health.

“She is just the sweetest, kindest soul who does not deserve this,” Jackson wrote.

Tricia’s beloved Piper, a miniature Australian shepherd, was with her at the time of the crash. Although secured in a harness, Piper was thrown from the truck and fled.

The skittish dog was missing for two 4-degree nights and was the subject of a search that included a foot pursuit up a mountain before it was finally caught with the help of a K9 rescue group.

Piper was not hurt and has been reunited with Tricia.

"That's kind of a miracle," her dad said.

David McCullough knows his daughter faces a difficult recovery, but he hopes that with support of family, friends and a community, she will battle back. 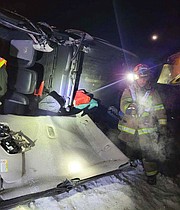 Photo courtesy David McCullough A firefighter responds to the scene of the early morning Dec. 27 crash on Interstate 90 east of Missoula where Tricia McCollough lost control of her truck.