With "takara" meaning "treasure" in Japanese, owner Kenta Nishimori and managers Shiree Nishimori and Joshua Williams offer lunch from 11 a.m. to 2 p.m. and dinner from 4-9 p.m. Included are sushi, beer, wine and sake.

Seating is for 110 customers at high and low tables with a Tatami room for traditional Japanese seating and the large sushi bar and sports TV. A VIP room with four TVs will seat about 50 for reservations only in the spring. Phone 208-771-7233.

With many drinks and pastries, Kaffee Meister opens Monday at 9212 N. Government Way in Hayden.

With mid-century decor, the spacious place has a large fireplace and a variety of seating areas. Hours are 7 a.m. to 2 p.m. Check kaffeemeister.com.

Melissa and Jeff Grannis save customers money on hobbies at 11 a.m. daily and closing at 9 p.m. Monday through Thursday, 11 p.m. Friday and Saturday and 7 p.m. Sundays. 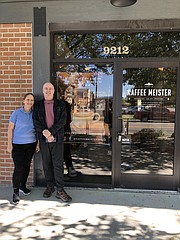 This article has been edited to correct information regarding Takara Japanese restaurant's ownership and managers.