Home-taught Italian chef Ben Mammina tends to his chicken scallopini Thursday night. With a passion for cooking and a love for people, Mammina prepares an authentic dish weekly for Ben's Italian Night at American Legion Post 143, in Post Falls. Open to the public for dining, meals are typically under $10. Mammina cooks up something different every week.
ELLI GOLDMAN HILBERT/Press

Adeline and Ben Mammina are both Sicilian. Drawing on his heritage, Ben prepares an authentic feast every Thursday for Ben's Italian Night at the American Legion Post 143, in Post Falls.

Mammina cooks up an Italian feast every Thursday night at the Legion in Post Falls. He readily admits he learned his kitchen skills from his wife of almost 78 years, Adeline.

“One day she came up, after 69 years of cooking dinner, and she goes, 'I quit,'” Mammina said.

Mammina took over the cooking and has been expanding his culinary repertoire ever since.

Ben and Adeline, who met when Adeline was 8 years old, moved to the area about 18 months ago. They joined their son, one of five children, who had moved to Hayden.

An Army veteran, Mammina served during World War II. The couple has long enjoyed the community of veterans at the American Legion, joining Post 143 shortly after arriving.

At that time, the Legion was hosting spaghetti dinners on Thursday nights. A hearty Sicilian, Mammina had something to say about that.

“I mentioned to them that people have the wrong idea. Spaghetti in the Italian meal is like the potato,” Mammina said. “It’s a side dish. It’s not the main course.”

Mammina volunteered to give an Italian sausage making demonstration, which drew about 25 guests. Drawing on his passion for Italian cooking, Mammina created more samples for the Legion kitchen to try and they loved it.

Now, spaghetti night at the Legion is headlined as “Ben’s Italian Night.” About 40 people come weekly to enjoy his offerings.

“His food is way out of class for this place,” said Legion member Don Kirk. “And this is the place to get it. It would be 50 bucks anywhere else.”

After a day of cooking that started at noon Thursday, Mammina gently tended to his simmering chicken scallopini while waiting for the pasta water to boil. Made with chicken, butter, vermouth, artichoke hearts, lemon and bay leaves, the smells of the kitchen remind Mammina of his Chicago childhood.

“Family was very important. All my mother’s brothers, my dad’s brothers and sisters, we were always together,” Mammina said. “I had a lot of uncles, a lot of aunts and dozens of cousins.”

Mammina has been preparing large meals for years and usually does the prep work himself, he said. While in Kansas, where the Mamminas spent 25 years, Ben put on a traditional Mother’s Day brunch for about 100 people. Among other things, he prepared a baked casserole dish made with eggs, milk and ham.

Corky Thomas, the Legion kitchen manager, and her entirely volunteer staff assist the chef in preparing the side salad and bread, and in serving guests.

“We’re loving his Italian food,” Thomas said. “Everyone is.”

The public is welcome for Ben’s Italian Night, and the main dish changes weekly. Meals are typically under $10 and all proceeds go right back into supporting the American Legion.

The Legion is located at 1138 E. Poleline Ave. and can be reached by phone at 208-773-9054. It's open for dining Wednesday-Friday nights and for brunch on Sunday mornings.

Mammina will offer another Italian sausage making class in April. There is a small fee, and guests go home having enjoyed an authentic Italian sausage sandwich, served with green peppers and about a pound of fresh sausage, Mammina said. 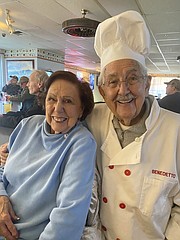 Adeline and Ben Mammina are both Sicilian. Drawing on his heritage, Ben prepares an authentic feast every Thursday for Ben's Italian Night at the American Legion Post 143, in Post Falls.